My visit at Jaquet Droz in La Chaux de Fonds. A manufacture which is preserving the most amazing artistic and mechanical skills I have ever seen.

Watches and Art > Posts > Allgemein > My visit at Jaquet Droz in La Chaux de Fonds. A manufacture which is preserving the most amazing artistic and mechanical skills I have ever seen.

My visit at Jaquet Droz in La Chaux de Fonds. A manufacture which is preserving the most amazing artistic and mechanical skills I have ever seen.

I recently visited Jaquet Droz for two days.  They took us into a different world of watchmaking which presented us with facettes of horology I have never seen anywhere else aside from the Parmigiani restoration atelier.  But this went much further.  The experience was unique and quite impressive.

Be prepared for a long and comprehensive writeup about my visit.  There is so much to share… 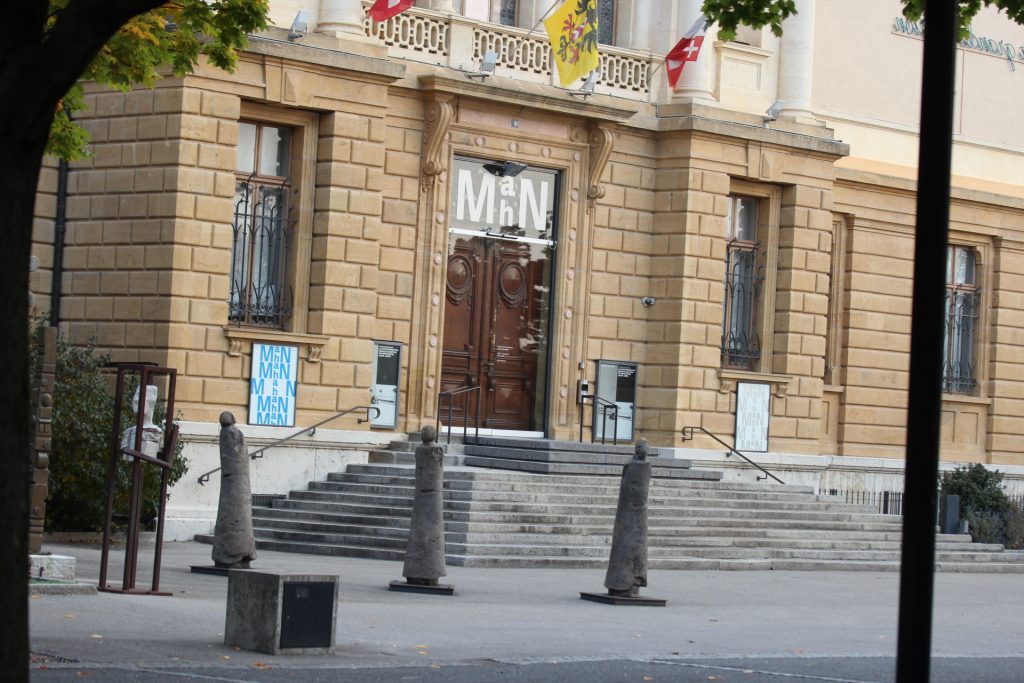 On the first day, we went to the MAHN museum in Neuchatel. It is a small museum, but it is housing some of the most amazing pieces of mechanical art you can possibly imagine.  True treasures as you will see.

The automatons were created by Pierre Jaquet-Droz in the mid 18th century, later on together with his son.  Honestly, I think, Pierre Jaquet-Droz must have been one of the biggest geniusses in watchmaking, but just keep reading and you can make your own opinion?

The automatons from the past 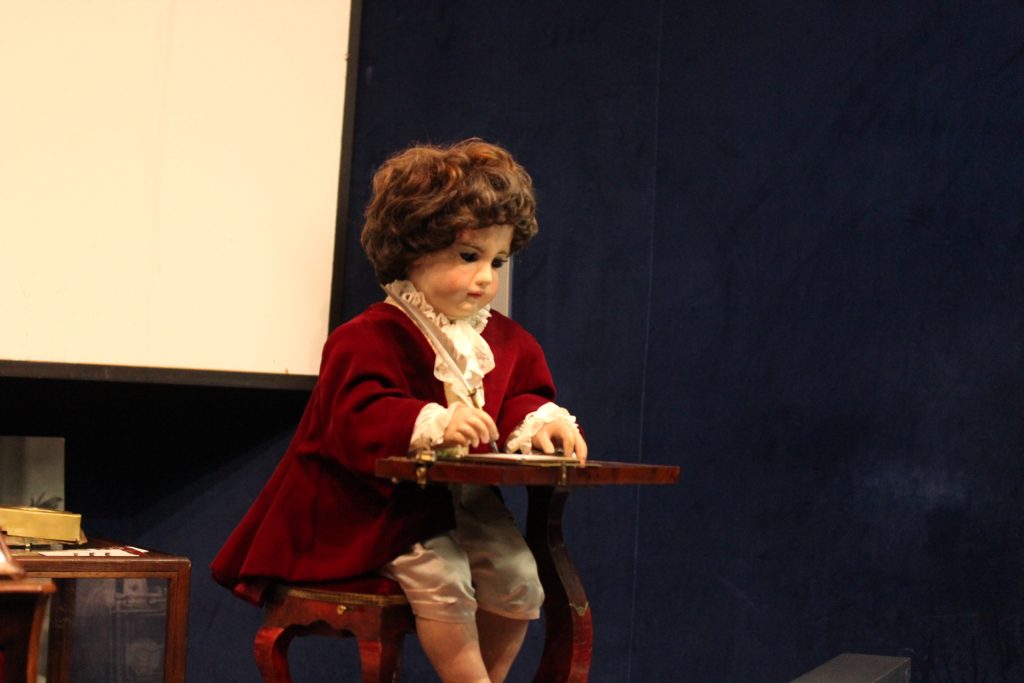 The museum is home to three famous automatons, two of which are able to write and paint, and the third one is playing a musical instrument.  The automatons were supposedly found at a castle in France called Chateau Malignon which is what I read somewhere on Ebay.


Viewing photos of these automatons cannot give you even the slightest impression that you are up for when you see them in action.  Therefore, I will share with you several videos.  I promise you will be impressed.

One of the automatons, I think it was the one that is able to paint a dog and other things, consists of over 4500 parts.  Can you imagine the complexity and that someone built this in the mid 18th century?  This automaton may even be considered an earliest version of a computer.  Take a look how he is painting a dog:

The back of this automaton gives view on an extremely elaborate and complicated mechanical setup with over 34 discs and 4500 parts that allow his to move in every direction.  It is extremely impressive watching him in action. 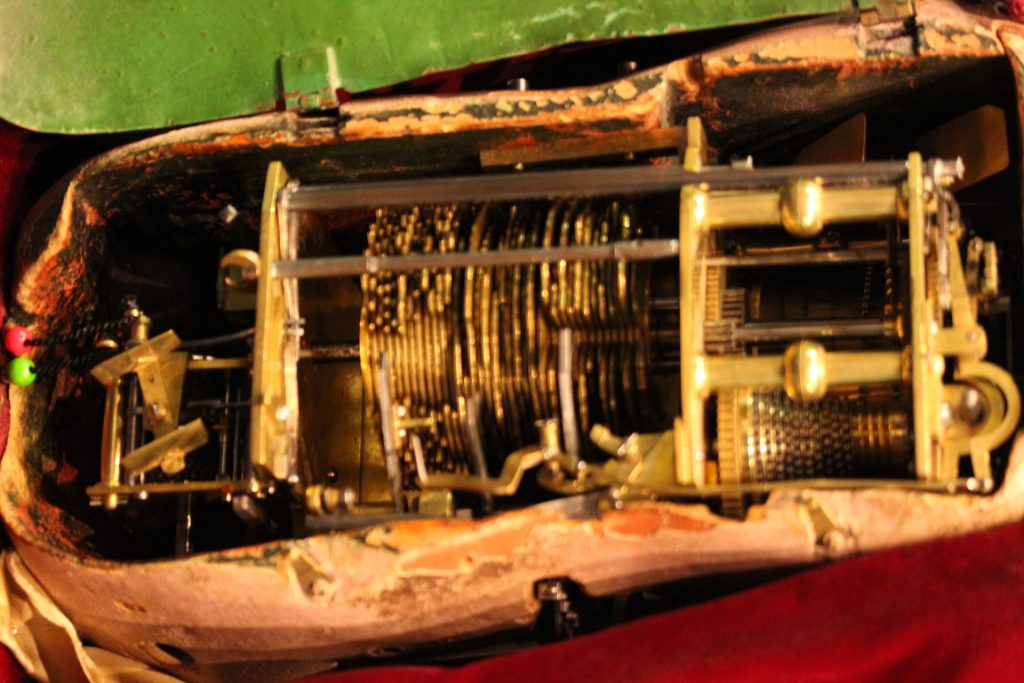 And not only can he paint a dog, he can paint a lady’s head as well as other things:

Watching the other automaton writing text is not less impressive, even though it appears to be somewhat “simpler”:

The most striking automaton is however the lady that plays the orgue.  It left me speechless.

The above videos were taken by myself during my visit.  Time was short, there were not really several shots possible.  So what I filmed is what I got.  I am sure, I will make another visit at some point and then I will take better videos as I now know what to pay attention to.

The BBC created a 5 minute video of the writing automaton which is fun to watch as well. 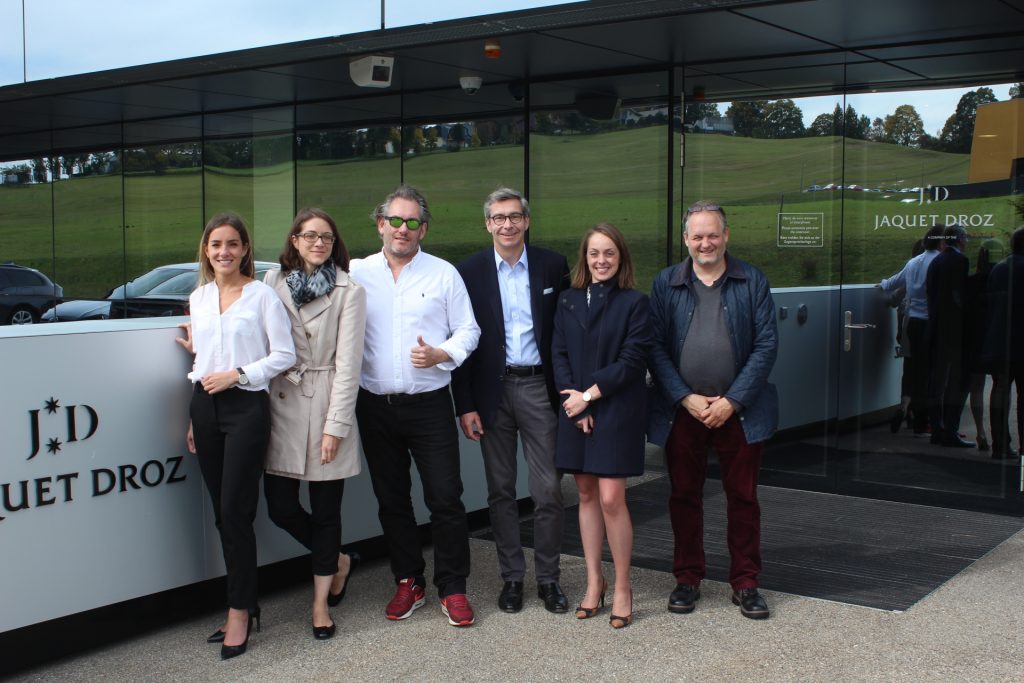 The visitor group with the Jaquet Droz team.

The visit at the manufacture took us around all departments.  Jaquet Droz is especially known and recognized for their ability to create automatons in wristwatches and for creating artist dials with handpainted motives, either by choice of the client (yes, you can get your customized dial, and if you ask, you may even get a dial that you can paint by yourself) or by client’s ideas and wishes.

We were shown how artist dials are painted. How the tiny pieces of the Loving Papillon, of the Bird Repeater, and other watches are handmade.

This is an example of a unique dial made on client request. 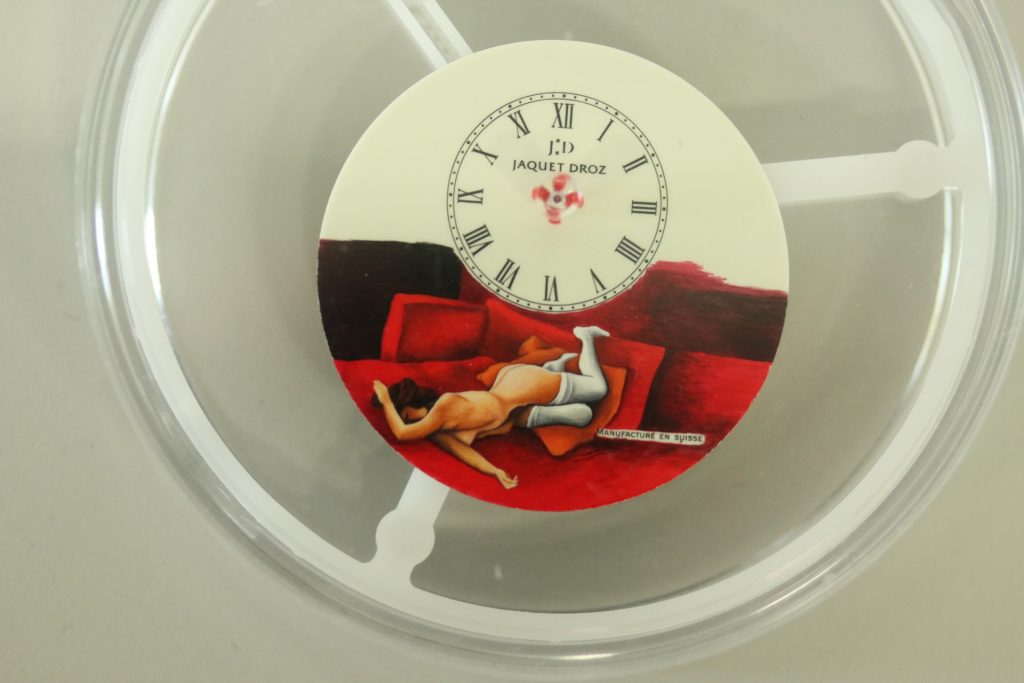 Charlie the magician can make any watch disappear.

Back then, Pierre Jaquet-Droz traveled to Spain by horse carriage to present his first 6 clocks and automatons.  The royal family of Spain immediately bought 6 of them.  Now, you have to imagine that in the early 18th century, traveling across Europe was all but easy.  It took a long time, many months to go from one place to another.  In order to protect his clocks and automatons, he had to build special protective casings.  And he had no way of knowing if he would succeed in selling.  Getting an appointment with a royal family was nothing he could really organize or plan by any means.  What he accomplished at a young age was close to a miracle considering all circumstances. To keep a long story short, he sold all 6 pieces to the royal spanish family.

The automatons from the past and nowadays 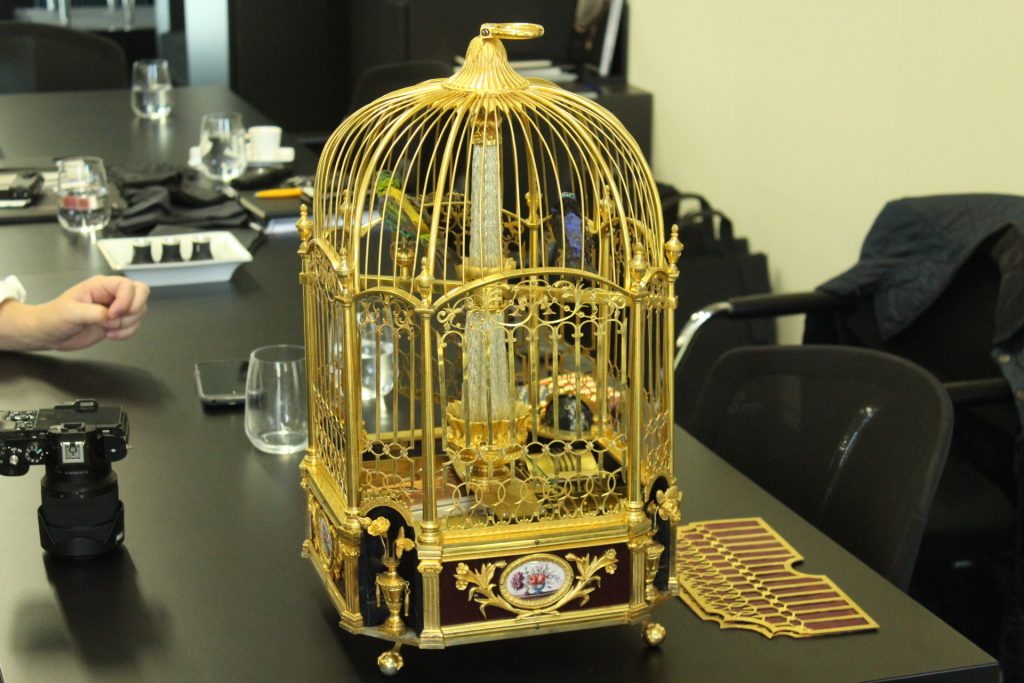 The bird cage is a masterpiece, created by Pierre Jaquet- Droz and his son.  Nobody knows how long it took them to make this.  It is very intricate. The bird sing and have real feathers.  And despite being nearly 250 years old, it still works and is in amazing condition.  This piece cannot be seen outside of the manufacture.  Let me share a video with you to give you at least an impression.

The singing bird is probably one of the most famous creations by Pierre Jaquet-Droz:

You may recall the singing bird pistols sold by Christies some years ago for nearly 6 Million USD.  They were made around 1820, long after Pierre Jaquet Droz passed away, by Freres Rochat.

Nowadays, Jaquet Droz is owned by Swatch Group which really is doing everything to learn from the history and create timepieces inspired from the past.  Therefore, aside from the famous grande seconde timepieces you find two collections which are called Ateliers d’art and Automata trying to keep in sync with the tradition of artistic skills and mechanical exception.

The “8” has special meaning for Jaquet Droz and therefore, there are 8 codes, and the real artist timepieces are limited to 8 pieces.  More about the code of 8 can be found at the homepage of Jaquet Droz.  While some may think that the number 8 is related to the cultural perception of wealth in Asia, there is no historic documentation about that in this case.


From Automatons in the 18th century to the 21st century.  Jaquet Droz has been able to find old automatons as you could see above.  And from those they were able to learn how to create them, and even better, how to miniaturize them so you can have tiny automatons in a wristwatch.  Only when you have seen this live will you be able to encompass what this means and how difficult this was to accomplish.

The bird repeater can be had with different backgrounds, such as the Swiss alps and other paintings in the background.

Not only is there a bird repeater where the bird on the dial can move their bodies and wings and feed their offspring, there is also a minitaturized singing bird in a wristwatch.  I have not seen any other watchmaker being able to create these marvelous mechanical automatons in a wristwatch.  This has to be a first.  And it is truly an extraordinary accomplishment.

The singing bird is equally impressive.

Trying to paint on a dial by ourselves, Jaquet Droz gave us 20 minutes time to create a lion’s head on a dial which would then be heated in the oven.  We received a paintbrush with brushes as thin as a hair. 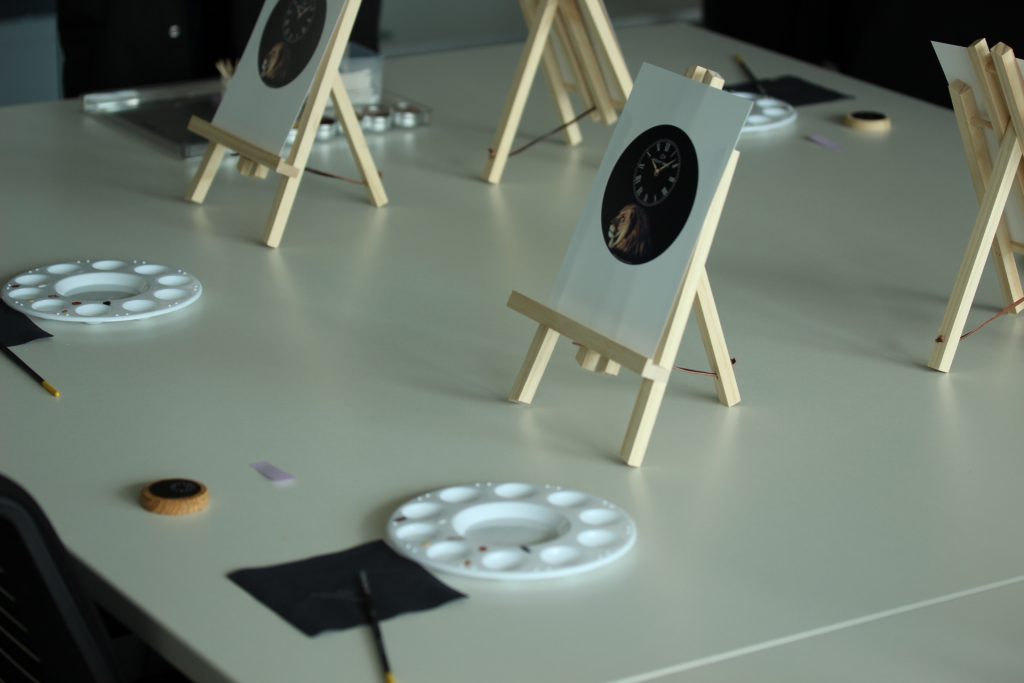 Then we were given special colors which will be conserved by hearing in an enamel oven.  In addition, lavender oil was needed to paint, the oil is making the colors fluid enough to paint.  But, be cautious, the dose of lavender oil decides about life or death of your micro painting. 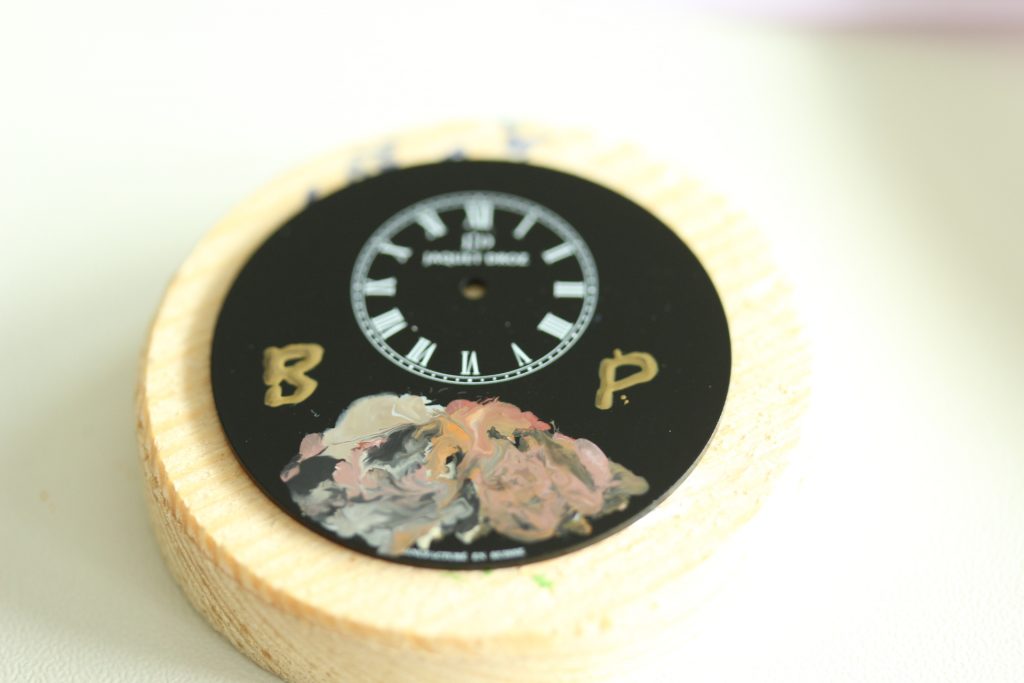 This is supposed to be a lion head.  Not exactly what it looks like.  More like a swiss alps mountain range maybe?  Well, I tried… 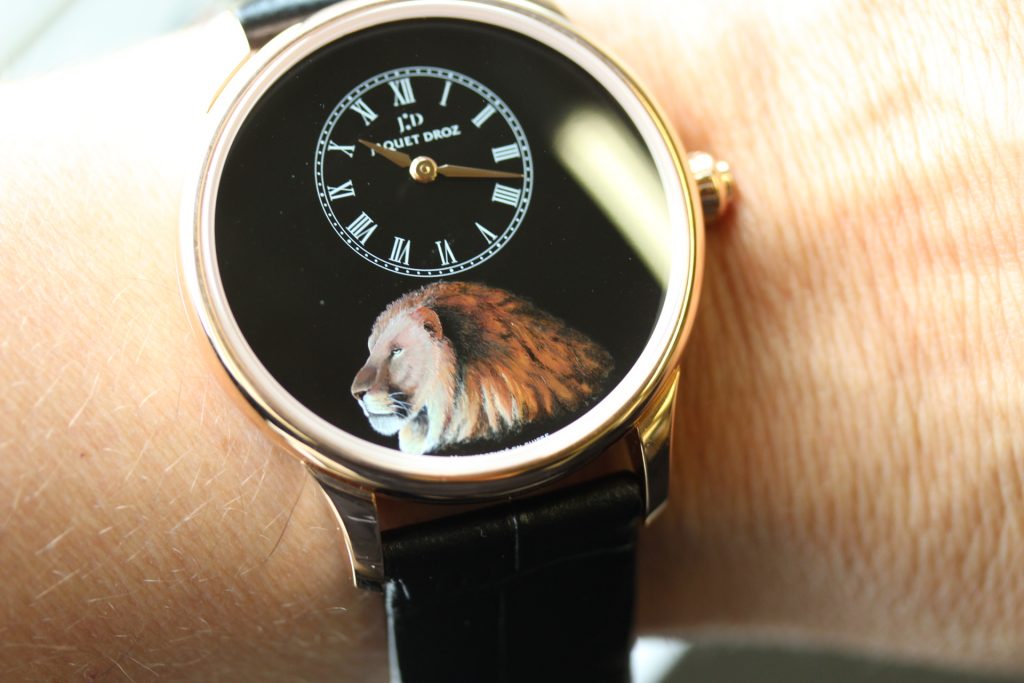 This is what the dial should look like with the lion’s head.  There are only two artists at Jaquet Droz who are able to paint this micropainting.  The lady who was present during our visit and who does these micropaintings explained to us that it takes her approximately 16 hours of pure time to paint this lion.  She sits at the desk looking through a microscope to create this lion.  We had some time to watch her doing it and it was truly impressive. 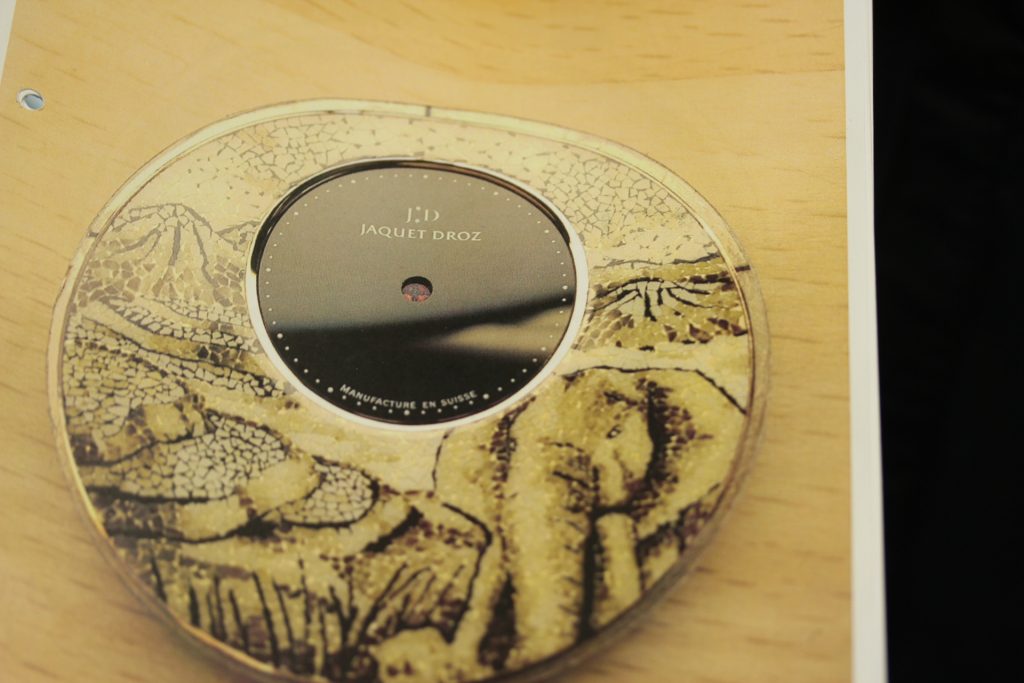 The mosaic elephant is another amazing piece of art.  Tiny pieces of stone in all different colors are put together to a micro mosaic.  I do not recall how many hours this takes, but you can probably imagine how painstakingly this is. 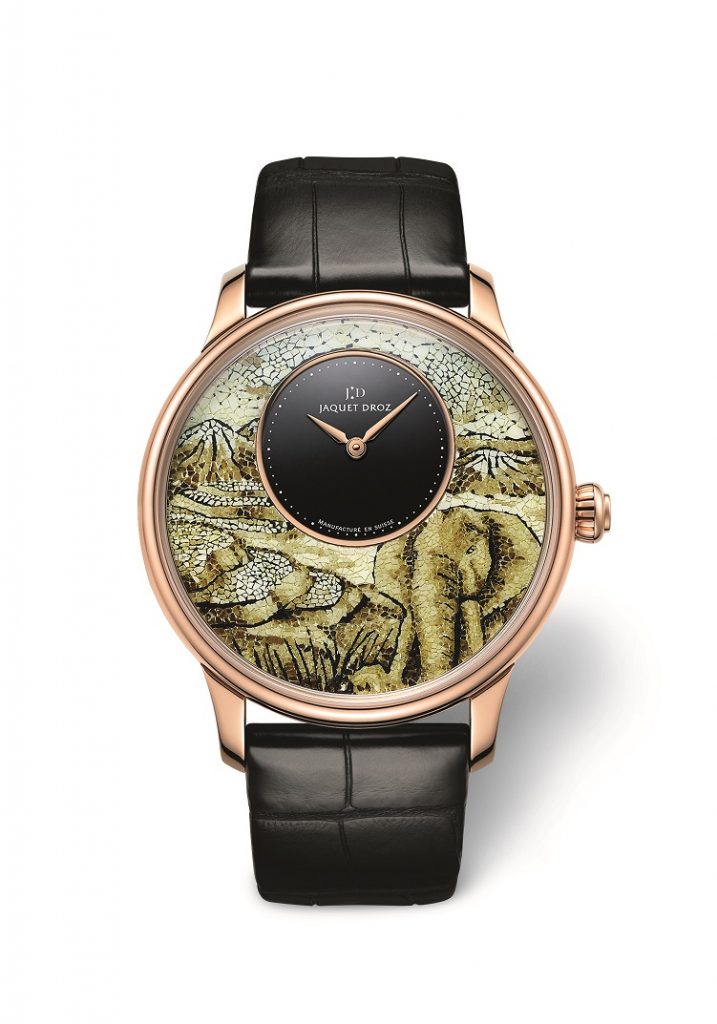 This is the final mosaic elephant timepiece.

The Paillone art goes back to the earliest days of watchmaking at Jaquet Droz as well.  There are several pocketwatches with this art. 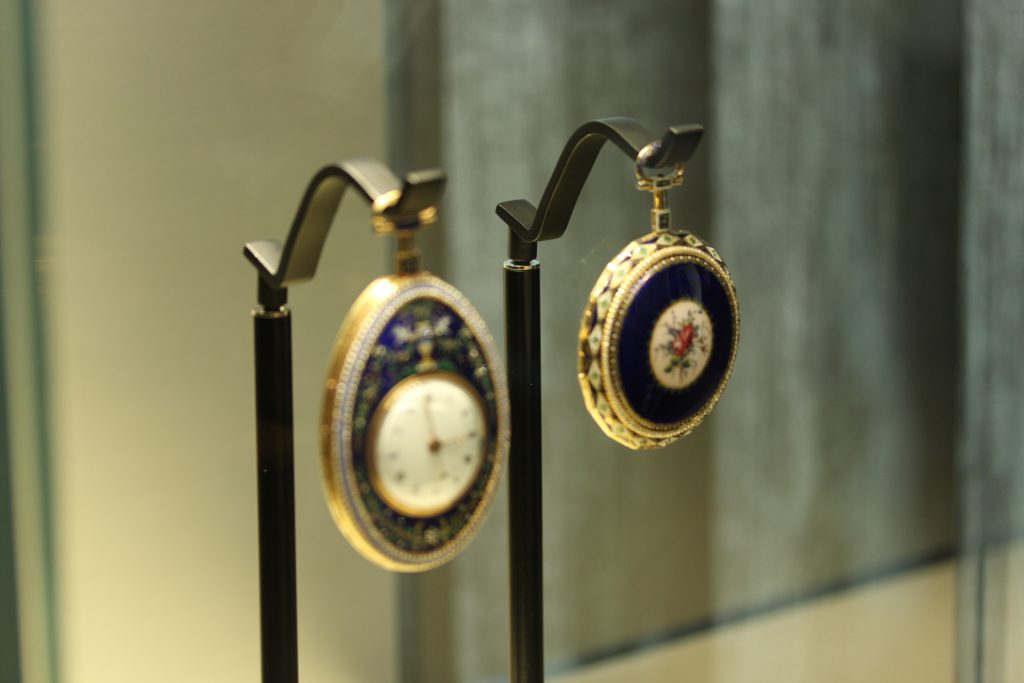 This is what Paillone (click to read an extensive writeup on Paillone) looks like on a current model.  On top of that, the dial below is somehow enamel guilloche.  Quite a lot of steps to create this dial. 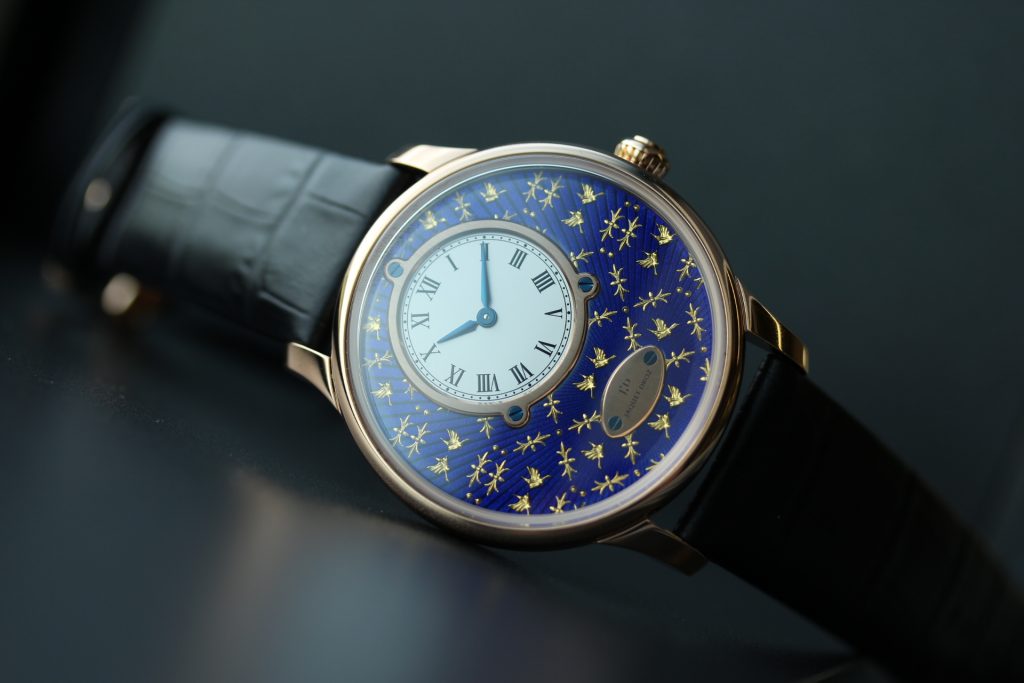 It took a long time for Swatch Group to find people that were able to learn the art of Paillone.  Tiny leaf gold is applied on an enamel dial. 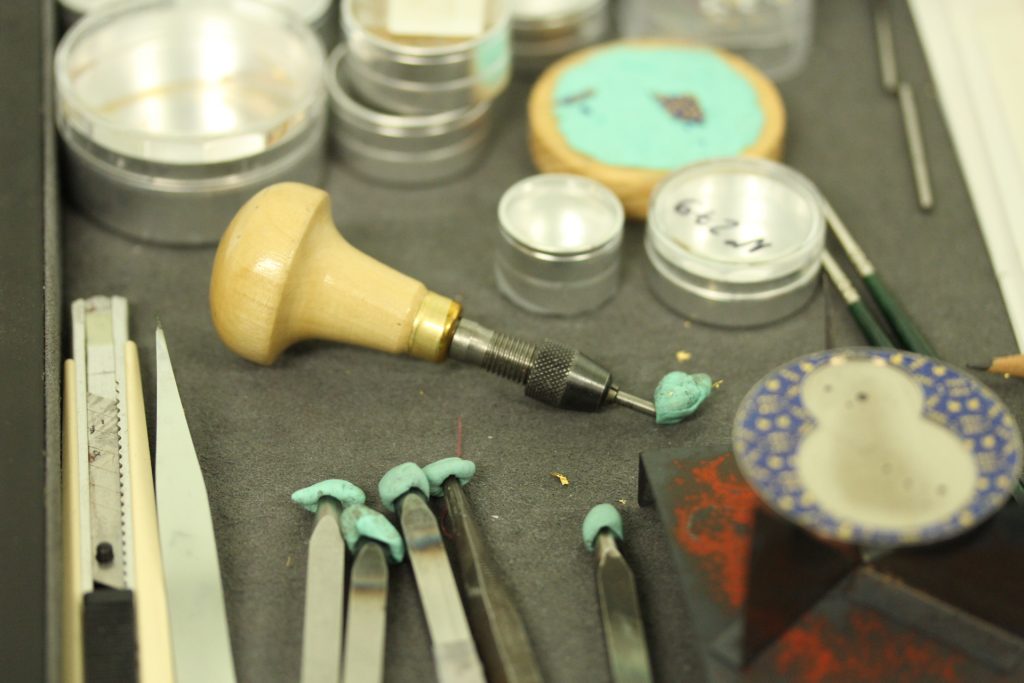 You can see the took that is used to apply the leaf gold pieces.  The work requires more patience than you can imagine.  And a lot of talent.  I think there is only one person at Jaquet Droz who can do this, at most there are two.

The loving Papillon (loving butterfly) goes back to the earliest history of Jaquet Droz.  The automatons were able to paint him, and it was found on early pocketwatches as far as I recall. 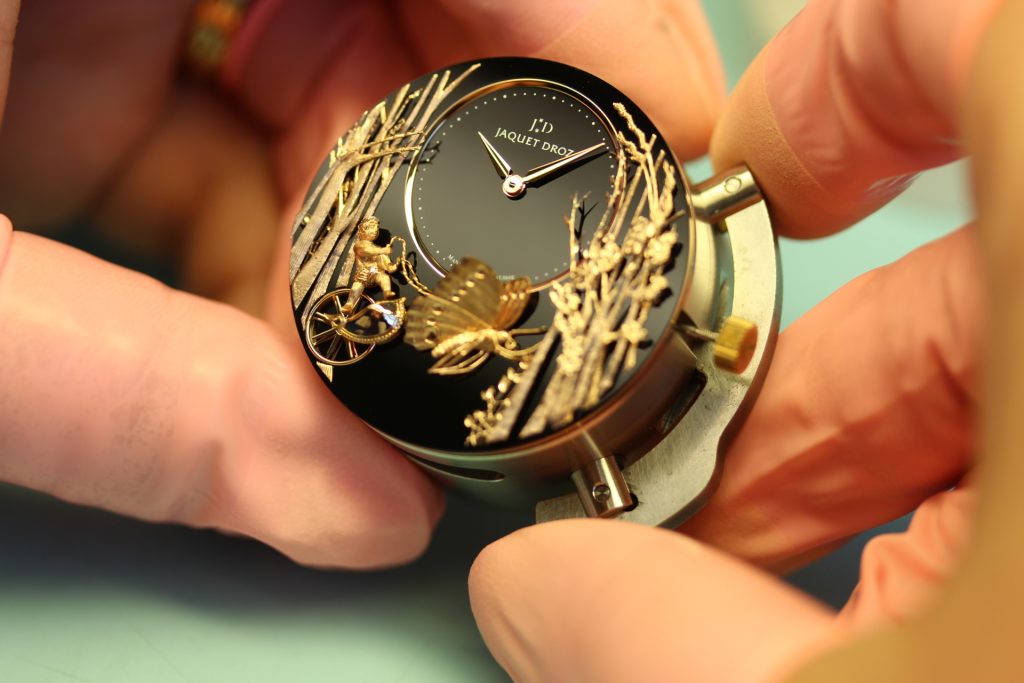 The body of the loving Papillon is tiny as you can see here.  It is handfinished taking hours to finalize.  And that is just the body.  Every other part of it takes the same procedure. 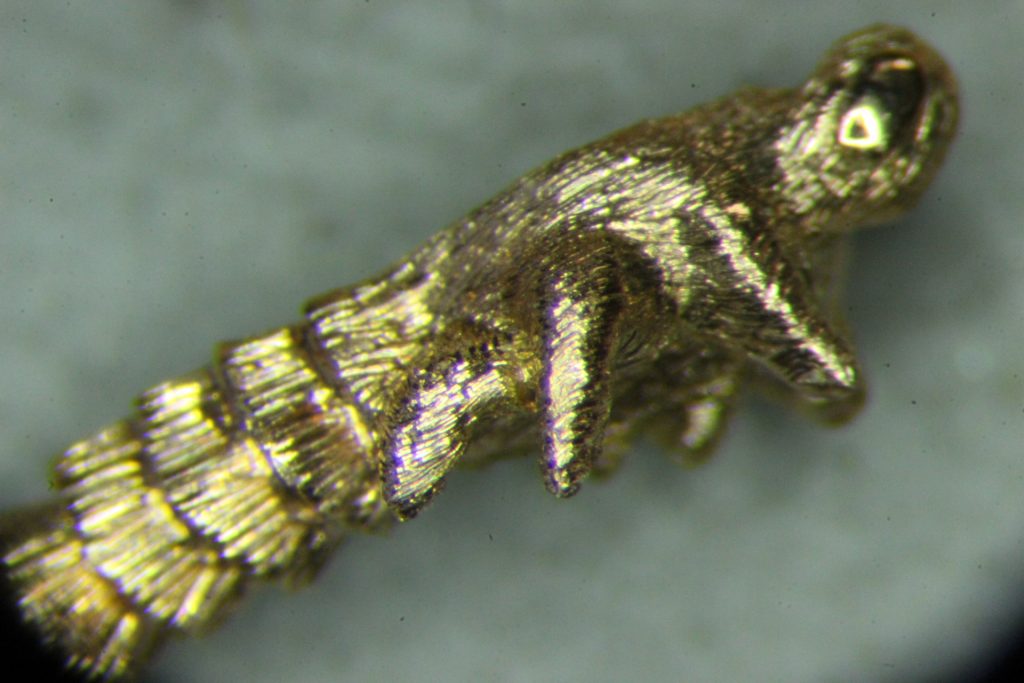 Not at all easy to photograph…the body of the Papillon.

The loving Papillon can be found on painted dial as well as on automaton dials. 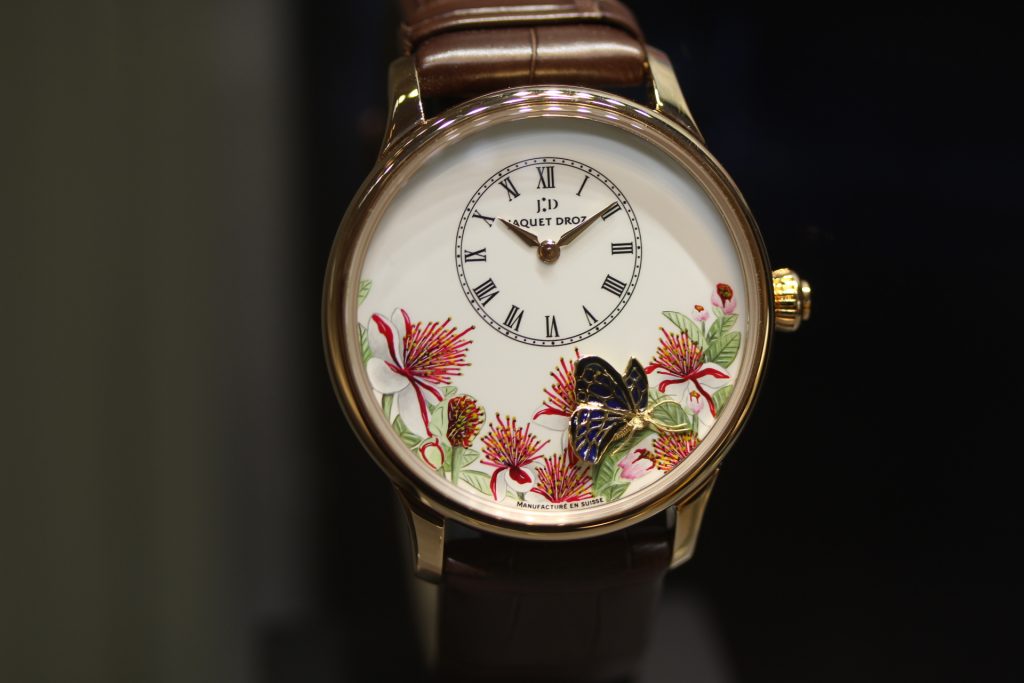 Below is a video to watch the loving Papillon in action.

What I saw at Jaquet Droz shows an impressive level of sophistication and artistic skills.  Few people at the company are talented enough to create these masterpieces.

Timepieces from the current collection

The latest timepiece from the Jaquet Droz collection is the Grande Seconde Moon Ivory Enamel. It has a moonphase on a beautiful ivory colored enamel dial.  The collection is comprised of three variations. 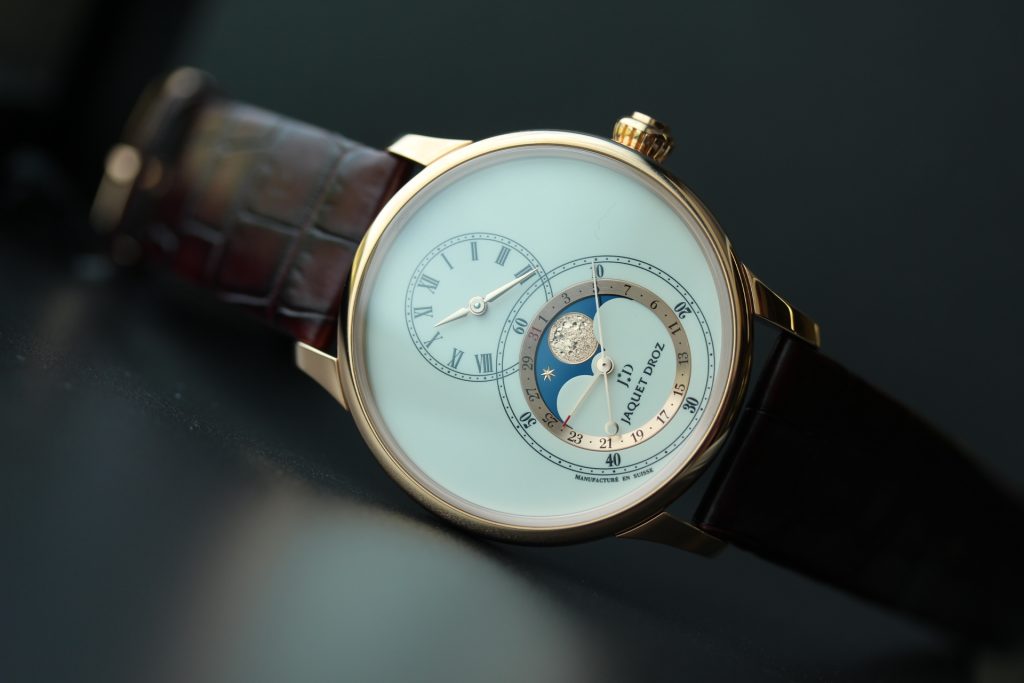 The deeper I go into the history of Swiss watchmaking, the more I see what Swiss watchmakers are able to accomplish, the more I am learning about a world that is unique to Switzerland.  Not sure if any other country in the world has such a strong tie to watchmaking?  And it is impressive to see the different facets of watchmaking, even those, which are not directly related to watchmaking although they require the same skillsets.

This trip was very special to me and I would like to extend a thank you to Swatch Group for taking the time to show me something I have never seen before.

I hope that my contribution has been able to give you an impression of what is out there and that you enjoyed it.

Jaquet Droz is the perfect example for watches to be art. Watches are art or can be art as we can see.  So Pierre Jaquet-Droz must have been the biggest genius in Swiss watchmaking, wasn’t he?