A new watchbrand: Vicenterra in Switzerland

A new watchbrand: Vicenterra in Switzerland

He I started the subscription period in April 2010.  Seven months later he had a minimum of 70 responses to enter the second phase, the creation of a corporation and to send out contracts in December 2010.  Three months later, 68 contracts were paid and he started production.”

According to Vincent Plomb, this is not a one time shot.  He would like to continue creating more watches, different models, and he has many ideas in his brain.  He views Vicenterra as a brand conception.

There will be first 100 watches made for the subscribers.  Then, a seconds series of another 100 GMT 3 watches will be produced for other interested people.  Demand and the reaction of people will determine further proceedings.

Vicenterra watches have been mainly reserved for people in Chicago, in Paris, Marseille, Beijing, Malta, Budapest, and mostly for people in the area of Geneva and the Jura area.

Well, here are some pictures of his watch, taken from his homepage.

If you are interested in this watch, or like to find out more information, visit the homepage or send an email to myself or to Vincent. 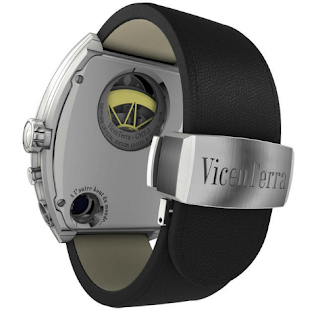 Further sites with reports on this watch can be found below: