The watchindustry and the Internet have become increasingly close allies over the past decade or two.  This was not always like that.  I am having the great pleasure of interviewing Richard Paige, 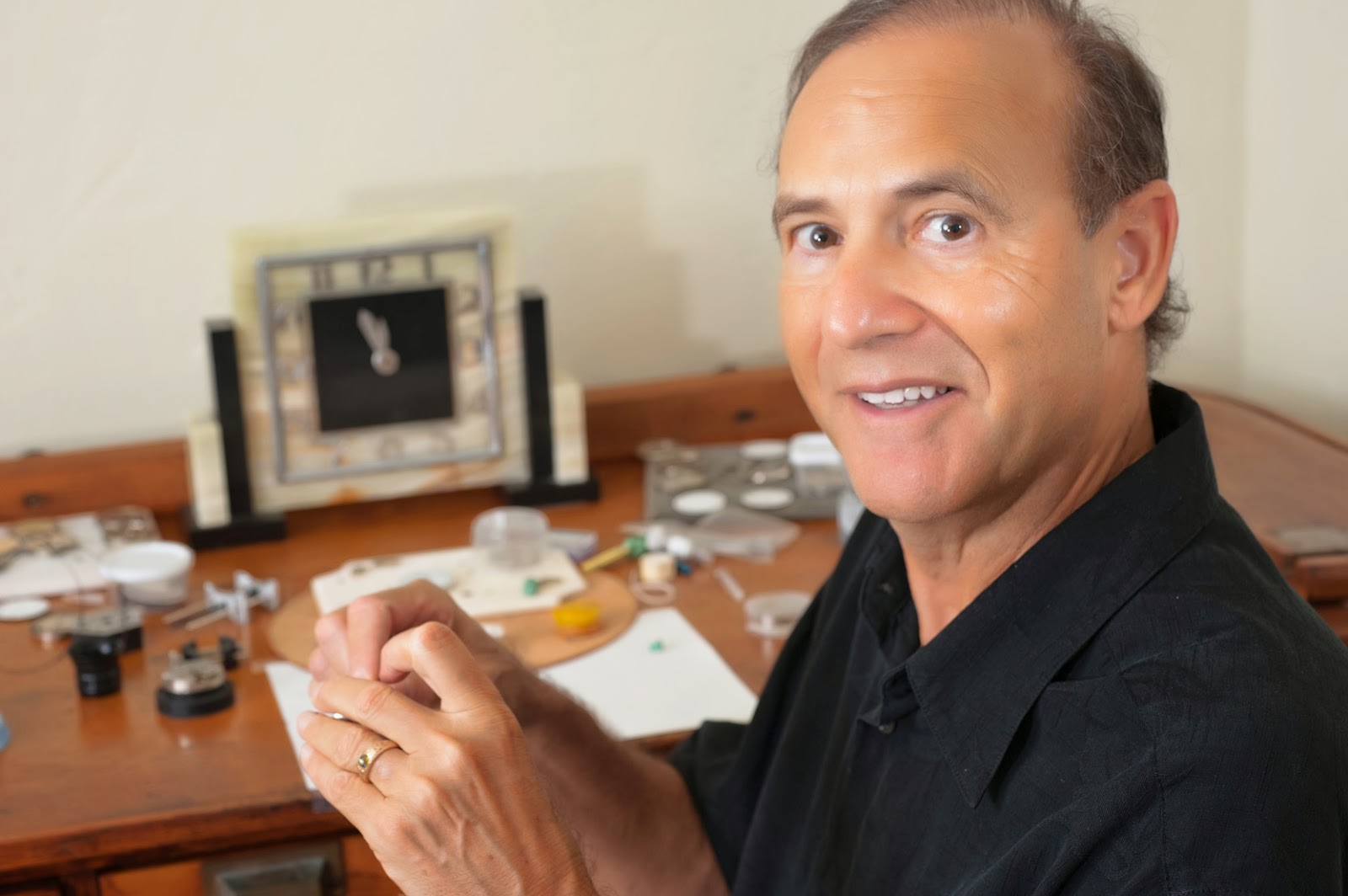 1 – Can you tell us a bit how you got started with Timezone.com?What was your inspiration, your idea behind it?


My start with the Internet watch world goes way back to 1996. I had a high profile retail watch store in San Francisco (Note: His signature store was Paris 1925) and was doing a great business with Silicon Valley high-tech customers. I had been playing with watches all my life since I am a Fourth Generation Watchmaker. One day this guy walks into my store and said he had heard a lot about my store, and would I be interested in being an online auctioneer for watches on his new website Onsale.com, this precedes EBay. To be honest, I had no idea what he was talking about: the Internet? Email? Huh??

But eventually, he seduced me into becoming part of his endeavor. To show you how far back this goes, I had my full name, on AOL email. After I worked at running the watch auction for about a year, I decided to go to my own and launch my own website for my retail store. I believe that my store the first online jewelry store in United States, this is a 1996. As I was working on the Internet I came across a small watch site called TimeZone.com, which was based in Singapore. I became a regular on the site, which consisted of about 60 guys, who all day talked about Omega or Rolex, and which was better. Since I’m not a huge fan of either brand I decided to become someone who would introduce the guys to other more “off the beaten path” brands like JLC, IWC, Vacheron, Patek, etc. It’s not that the guys didn’t know these brands; they just weren’t that interested in them. I had been in touch with the owners of the site in Singapore, and had kind of hinted around that I was interested in the domain name. They really weren’t part of the TZ community, but were web designers, who had created TZ to show potential clients what could be done with the Internet. When TimeZone started to get unruly and started taking their time away from their design business they got tired of the whole thing. Eventually, after one particular event where a poster bombarded the site with thousands of repeating posts, known as “bombing”, they had enough of the chaos of TZ, so they shut down the site, and were VERY glad to hand the reigns over to me (for a price). I worked out a deal with them, and immediately took over the responsibility of trying to resurrect TZ from the ashes. To those of you who don’t understand what the bombing was: in the old days of the internet there was no registration nor restrictions on posting…. so a malicious poster could create a silly post, keep his finger on the “post” button, and “overtake” the forum with the same repetitive post, over and over, ad nauseam. Eventually shutting down the site with “cyber overkill”.

My initial idea for TimeZone was to be the world’s go to place for watch info, to be both educational and entertaining.


2 – Why did you let Timezone.com go, when did you decide to do so?


I was an early adopter of the Internet and prided myself on my foresight by buying TimeZone in 1997. However, in 1999 I really began to see the handwriting on the wall. This was at the height of the Dotcom explosion, and everyone wanted a piece of the pie. The IPOs for Internet stocks was exploding and the valuations began to get very frothy. With the successful IPO of stocks like Amazon and EBay, in 1997 and 1998, all eyes were on the Internet companies. At this point I hadn’t made any money, to speak of, with TimeZone, but it was costing me more than I could afford. Also my wife and I just had another baby, and I had thrown all my chips on the table with TimeZone when I closed my retail store to become a pure Internet owner. I was starting to get approached by all sorts of players, with money and without, about selling or merging TimeZone to, or with, other bigger players. I realized that in order for me to achieve my dreams and goals I had to take TimeZone to the next level…which would require a major infusion of capital. Something I just didn’t have. So, I sought a White Knight: someone who could capitalize the concept and still allow me to run it the way I loved. This was naïve thinking. I sold the site to Ashford.com, a publicly traded company, in October of 1999. Sure, they let me still manage the site, but they stifled my creativity so much, that I just couldn’t look at myself in the mirror anymore. I left TimeZone in May of 2001.


3 – What is your background in watches and watchmaking?


I learned how to fix watches from my dad at the age of 12, and by age 16 I was pretty proficient at watch repair. I’ve been playing and working on watches ever since. Although I did go to college, and I earned a degree in something completely different from the world of retailing and watches. I opened my first retail store in the 1970s when I was in my early 20s, with the idea in mind that I would do it until I gathered enough money to go to Graduate school. But furthering my education took a back burner to my enjoyment of running my own business, and one thing lead to another, and subsequently I opened six other retail stores all featuring antique watches or authorized dealership for prestigious watches. 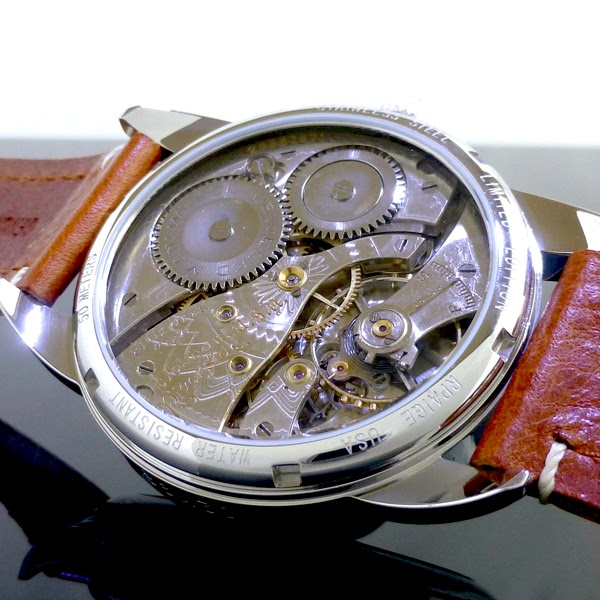 (The back of one of Richard’s current timepieces)


To start telling you about my current watchmaking company, I first have to tell you about my limited edition watches I created for TimeZone. I had created five limited edition watches for the TZ audience, and they all sold out. I collaborated with a few watch companies that were interested in marketing their watches to the TimeZone community but didn’t want to upset their retailers, so they allowed me to make a limited edition only for TimeZone . After I sold TimeZone, I still had a few more watch ideas and concepts that I really wanted to manufacture in a limited edition series, but I had no more TimeZone to market them on, and frankly, had burnt out on the internet, after managing TimeZone for 5 years. So I went back into real estate development, which I had been doing all along, and put the watch world behind me.

Then about two years ago I had a big birthday come up and my wife wanted to buy me a nice gift to celebrate the event. So she said: “let’s go buy you a nice watch”. Her budget was $3000, which for just about anybody was an expensive gift, however in the watch world, as we are all painfully aware, it is not a great lot of buying power. So we go into one of the big international watch chain stores in Honolulu and I started looking at all the watches for my gift. But all the watches I wanted, like Panerai, Jaeger, IWC’s etc. were all in excess of $6000, which was way beyond my wife’s budget. And, all the watches that were in her budget used an ETA movement. Now I have nothing against ETA movements, I just don’t want a watch in my own personal collection with a generic ETA movement, I wanted something with an in-house movement that had some history and personality. We walked out of the store without a gift for me, and an upset wife.

So, I decided there and then, to resurrect a watch I had designed in the late 1980s using an antique American pocket watch movement with an Art Deco design I always loved. I had named the watch back then, the Wrocket watch, which is a play on words: Wristwatch + Pocketwatch = Wrocket Watch. The reason I didn’t produce this watch back in 1987 was that in watch world, the average size watch back then was around 36 mm. The pocket watch movement itself is 39 mm, which made the watch at least 44 mm, and at that time people were just not wearing that large a watch. 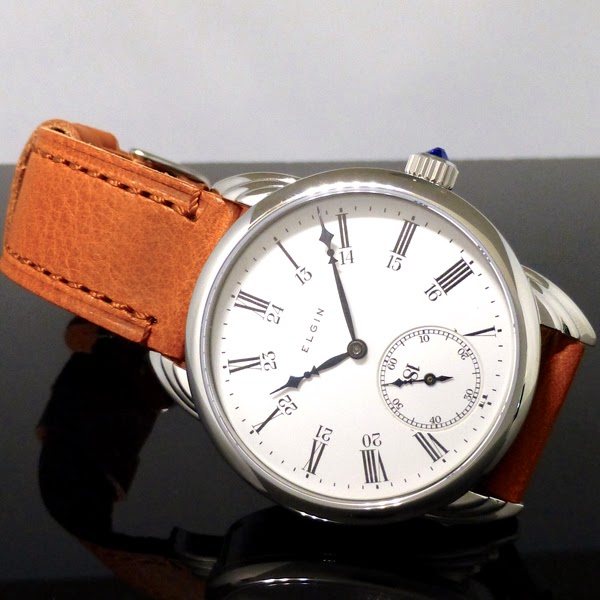 (Watch with fireenameled dial made by Richard)

But now, the 44 mm watch was just a perfect size.

The problem was where to get 600 pocket watch movements. Before I could start the project, I had to make sure I could find the movements because without these the project fell apart. I could have used some other new movements, but I wanted to keep the watch authentic and I thought that it would be an interesting new concept for a watch as an American watch rather than a Swiss. The Americans made the best watches in the world between 1860 and 1930, and then the Second World War came, and all the Watch companies stopped making watches for the public, and started to produce products for the war effort. (The Swiss, being a neutral country, were able to continue their watch evolution, and eventually surpassed the Americans in quality).

So I blew off the cobwebs from my Rolodex and e-mails and started to try to find 600 American Pocket watch movements. After eight months I finally did. So then I went ahead and designed the watch I always had mine using an Art Deco style, which was a perfect fit with the age of the pocket watches.

Iintroduced and launched the Rpaige Wrocket watch in steel andtitanium in a limited edition series last January, a year ago, andthe sales have far exceeded my expectations. Last month I introduced a new dial with a “complication”…. a rotating second disc 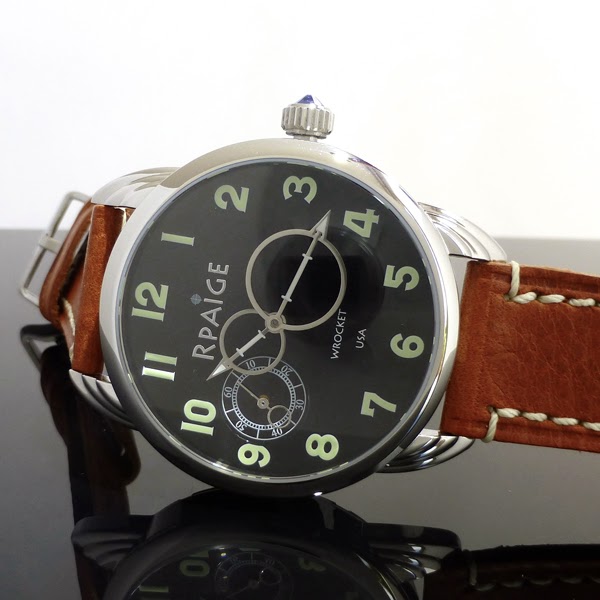 5 – In which countries are you selling and offering your watches?


Because the Internet has no borders, I’ve been selling my watches worldwide, although 80% of my sales are in North America.


I’ll be opening up a high profile watch store in Honolulu, Hawaii in April. And as of this month I’m actively looking for new and interesting watch brands to sell in the store (if anybody reading this has some brand I should know about, please feel free to contact me)

Thank you Richard for your time, and it would be wonderful to speak with you later in the year after you opened your new store.  Best of luck in your endeavors.