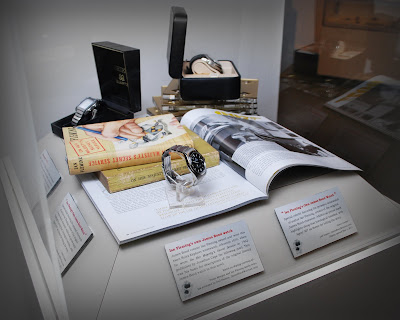 And a closer up of Ian Fleming’s Rolex Explorer: 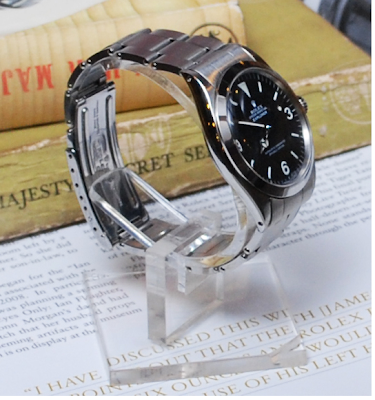 (Pictures courtesy of Dell and Kim at NAWCC in the USA)

COLUMBIA, PA: Time does stand still — sometimes. “Bond Watches, James Bond Watches,” a first-ever exhibit of all known 007-affiliated wristwatch brands that opened at the National Watch & Clock Museum on June 18, 2010, was scheduled to end its successful run on April 30, 2011.

Instead, three historic timekeepers have been held over to form the basis of a new display. This time, they’re out on the primary museum area.

Appropriately titled, “Ian Fleming’s Own James Bond Watch,” the centerpiece for this attraction is, in fact, the personal Rolex model 1016 Explorer worn by author Ian Fleming as he wrote his latter James Bond thrillers. According to Fleming’s surviving stepdaughter, Fionn Morgan, it was the only Rolex he’d ever owned, and it was his basis for the Bond watches he described in the 1963 novel, On Her Majesty’s Secret Service.

Having lived in the same house with him since the time of his marriage to her mother, who’d know better than she would?

Completing this sampling of James Bond watches is an Omega model 2907.50.91 “Casino Royale” limited edition Seamaster Planet Ocean watch, in presentation box and related accompaniments, is included in recognition of actor Daniel Craig’s premier appearance as Agent 007. A Seiko WLK005, G757-5020 fills out the trio — reflecting both compelling use of “time as ultimate adversary” in the original writing of Ian Fleming, so nicely captured in the Eon Productions film, Octopussy (1983), and the notable intersection between 007 timekeepers and the game-changing quartz revolution.

“Response to our initial ‘Bond Watches’ exhibit was very impressive,” notes Noel Poirier, Director of the National Watch & Clock Museum Director Noel Poirier. “It really was, and is, an ideal ‘story’ for engaging visitors and researchers in an overview of the last half-century of technology, culture, and marketing influences on the watches we wear. That’s the mission of this museum, of course, something we uniquely do, in 3- and even 4-dimensions.”

“Somewhere around the halfway-point of the ‘Bond Watches’ schedule, we all felt that some sort of a presence had to be extended through 2011 and into 2012,” Deaton explained. “An exciting new James Bond novel had been commissioned by Ian Fleming Publications, to be written by best-selling author Jeffery Deaver. Publication schedules called for a UK release by Hodder & Stoughton in late-May, and here in the US through Simon & Schuster in mid-June. Then Eon Productions would begin filming ‘Bond 23,’ with Daniel Craig again reprising his role as James Bond, targeting a November 2012 release.

“So I approached Fionn Morgan about extending the loan of her stepfather’s watch. She’s been an unwavering supporter of its display and examination, as well has being someone I consider a good personal friend. Without hesitation, she agreed to have the Fleming-Bond Rolex stay here into 2013. That says a lot about her respect for James Bond fans, her care for the Ian Fleming legacy.”

Dell Deaton (Jamesbondwatches blog) is a member of both the National Association of Watch & Clock Collectors and American Marketing Association, and an internationally recognized expert on Ian Fleming and James Bond horology.

Special thanks to Lewis Jewelers of Ann Arbor, Michigan, for its support in displaying the Omega “Casino Royale” limited wristwatch. Additional thanks go out to Seiko UK, London, and its former Technical Support Manager (retired), Mark Mills, FBHI, for preparation of the pseudo-analogue model shown.

Mr Deaton and the Museum further express their greatest appreciation to Fionn Morgan and the Ian Fleming family, without which the literary 007 Rolex 1016 Explorer model wristwatch would not be here.

The National Watch and Clock Museum is operated by the National Association of Watch and Clock Collectors, Inc., a nonprofit 501(c)(3) association with over 18,000 members, representing 52 countries. April through November the Museum is open Tuesday through Saturday from 10 a.m. to 5 p.m. and Sunday from noon to 4 p.m. December through March hours are Tuesday through Saturday, 10 a.m. to 4 p.m. From Memorial Day through Labor Day the Museum is also open on Mondays. Discounts are available to seniors, students, AAA members, and groups of 10 or more. Groups of 10 or more are encouraged to call ahead. For more program information, directions, or general Museum information, call 717-684-8261 or visit our website at www.museumoftime.org.