Today was a great day.  Moritz Grossmann presented their newest timepiece in Tokio: the Cornerstone, a square shaped wristwatch.  Something we probably did not expect.  And let me tell you this slowly: This is an amazing timepiece and I am looking forward to seeing it live at the manufacture in April.

Key features of the new timepiece include:

The watch strikes four times at the top of the hour. Four seasons form a complete cycle. The new CORNER STONE model from independent watchmaker Moritz Grossmann, which will be presented to the press in Tokyo on 7 March, has four corners. If you pronounce the English term “corner stone” in Japanese, the words curiously sound very similar in both languages: “Kōnāsutōn”. In Japanese script it looks like this: コーナーストーン

Grossmann Uhren GmbH wants to draw on this wonderful similarity between the two cultures and languages by naming the new model with the
innovative rectangular design CORNER STONE. It is Grossmann’s first watch in this design variant that is particularly popular on the Japanese market. The new calibre 102.3 was specially designed for the rectangular movement shape with a small second scale at 6.00 o’clock and a central hour and minute display.

The flat case of the CORNER STONE with the curved lugs nestles perfectly on the wrist of both ladies and fashion-conscious men and always makes an elegant statement. 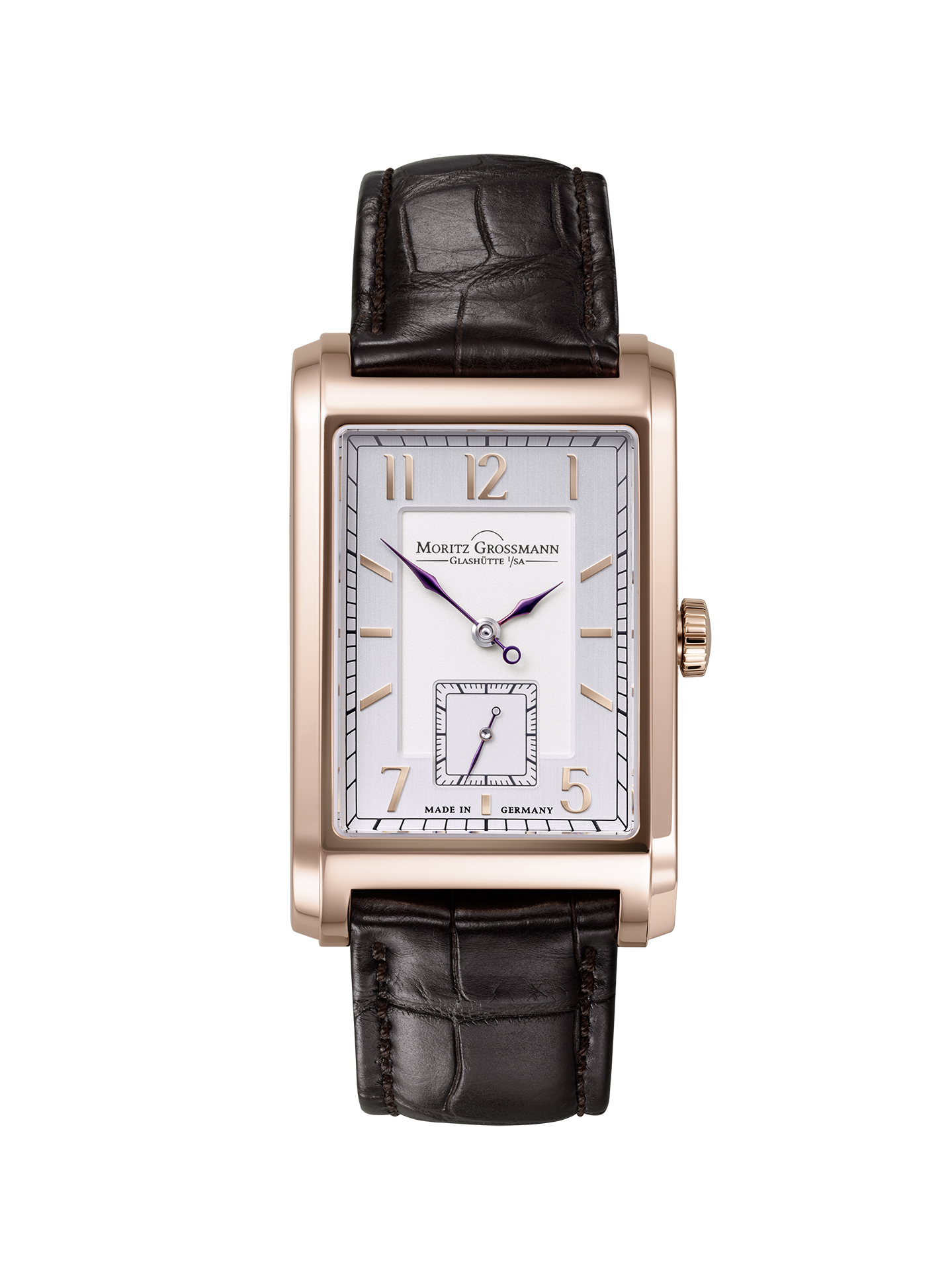 Solid silver, opaline dial
In this version, the dial is made of solid silver with rose gold appliqués. The case is
also made of rose gold. Another version of the dial features white gold appliqués
with a white gold case. Handmade, brown-violet hands harmonise with both
variants. A special feature of this variant is the small second and centre of the dial
square-shaped. 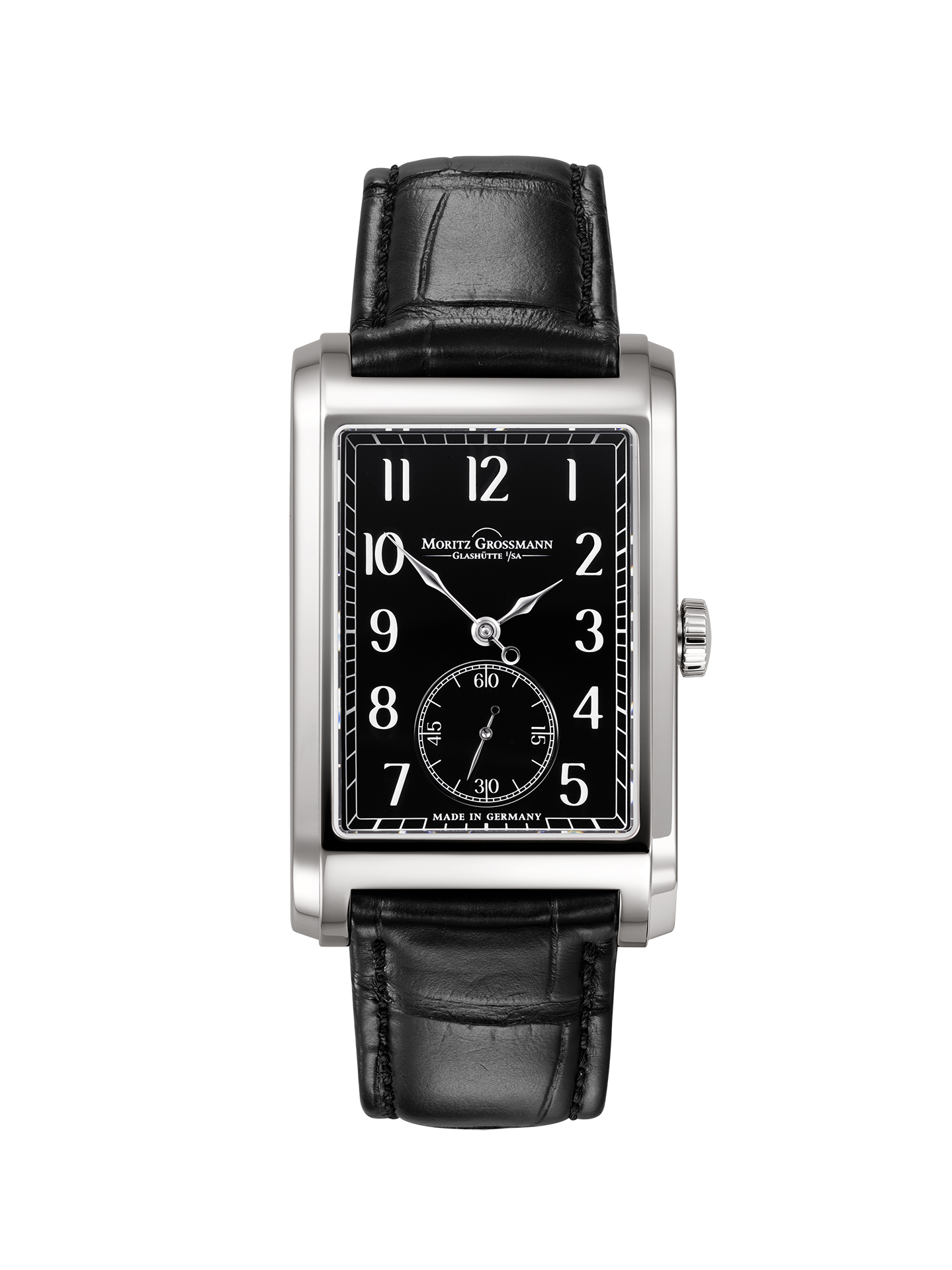 Solid silver, black lacquered dial
Another version of the dial in solid silver is offered in black with Arabic numerals
and a minute and seconds display scale in white. The case is made of white gold,
while the handmade hands are made of polished stainless steel. The small second
has a round shape. 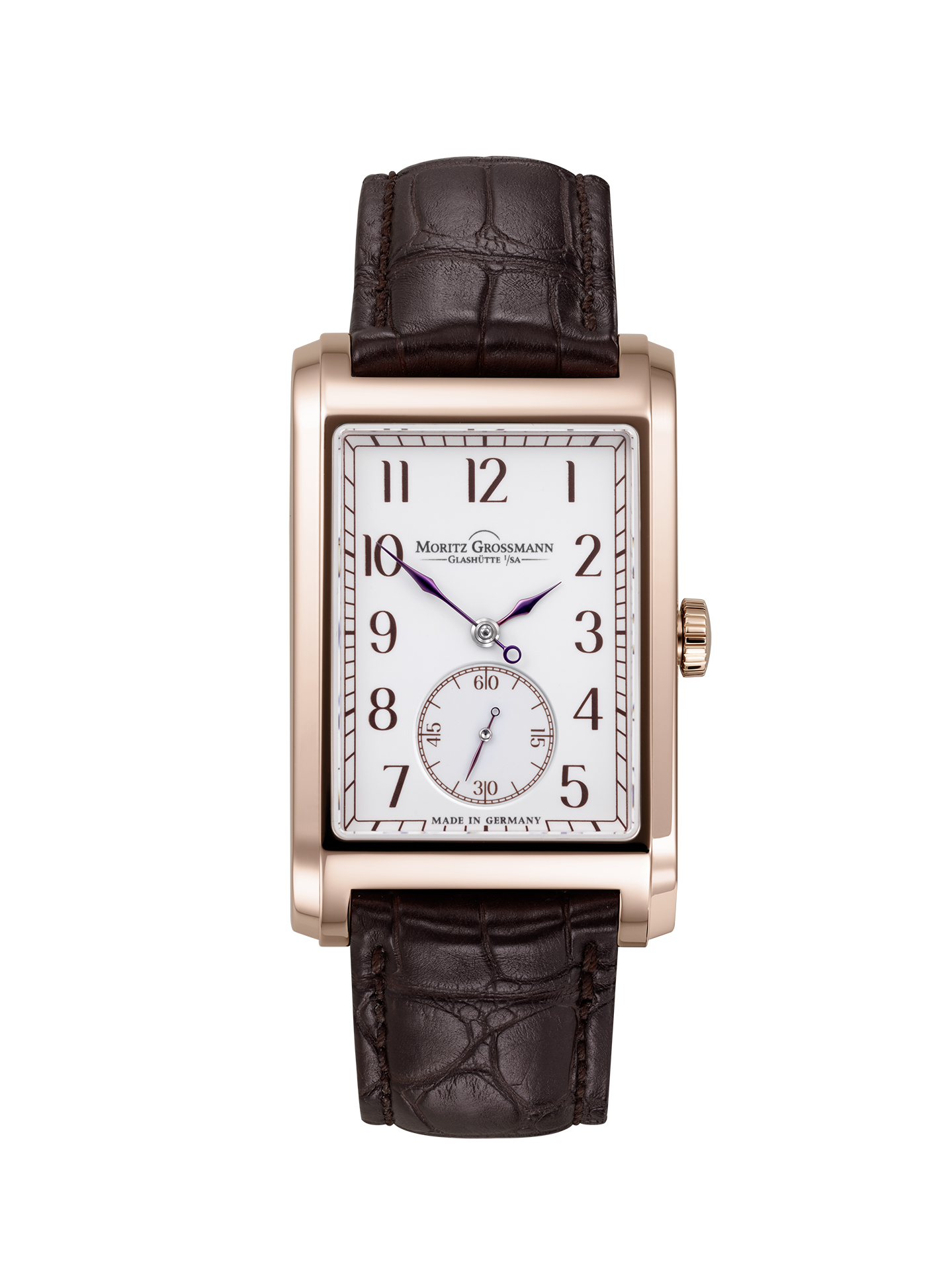 Dial in white Grand-feu enamel
The enamelled dial is in rich white, with the numerals, minute markers and time
display scale of the small seconds in brown providing an eye-catching contrast. As
with the silver dial version, the case is also available in white gold or rose gold with
handmade, brown-violet hands. The enamelled dial is furnished with a round small
seconds display. 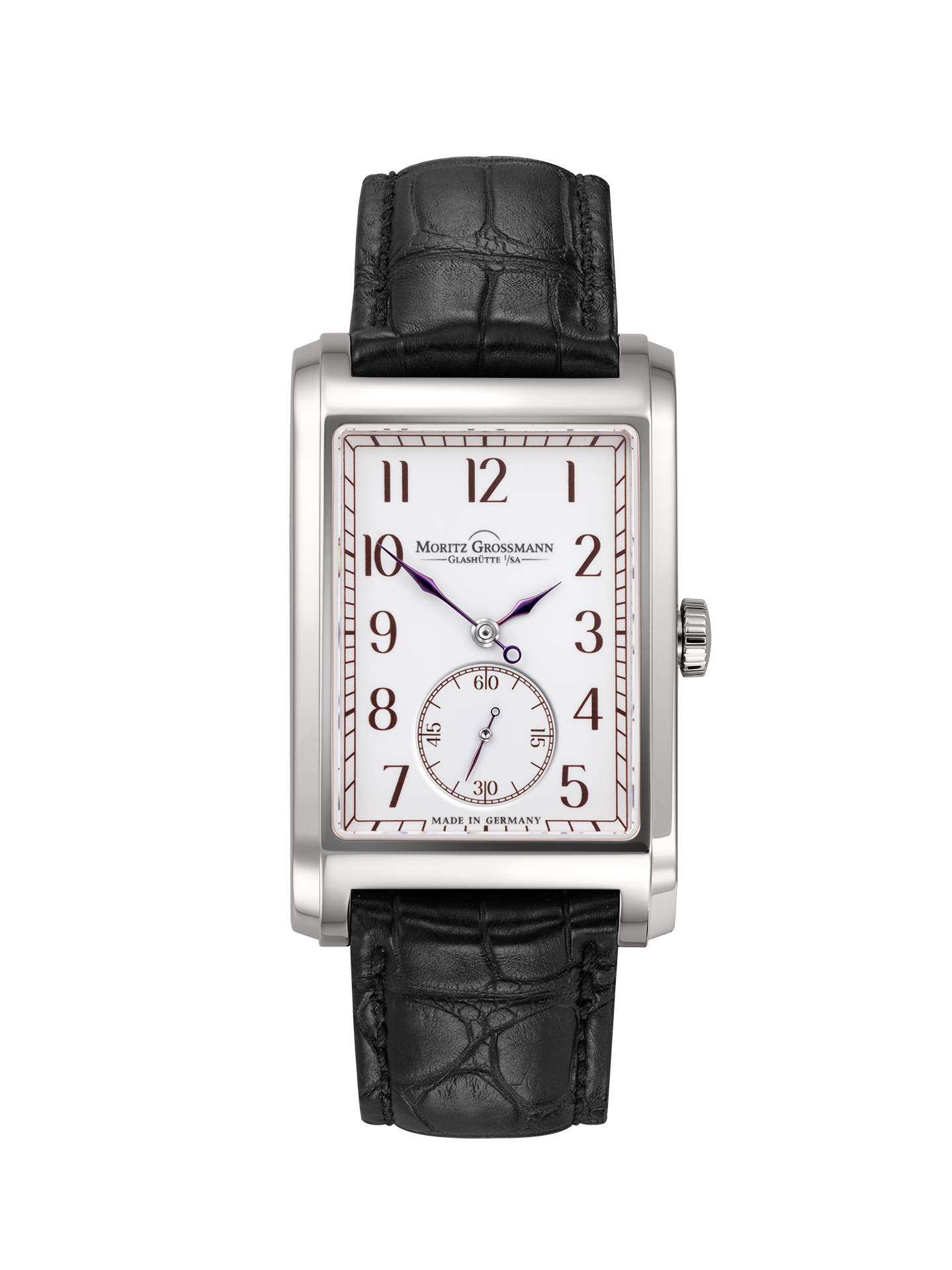 The white enamel version is limited to a run of 25 for each variation.

New calibre 102.3
A new calibre has been developed for the rectangular shape that makes optimum
use of the installation space and also offers further advantages. It has resulted in a
movement with a relatively large barrel. A significantly longer power reserve of
60 hours could thus be achieved. The characteristic stop-second function has
been realised in a new form. The kinetic energy of the angle lever is transmitted
via a coupling rod, whereby the balance is gently braked by means of the stop
spring and comes to a precise standstill. 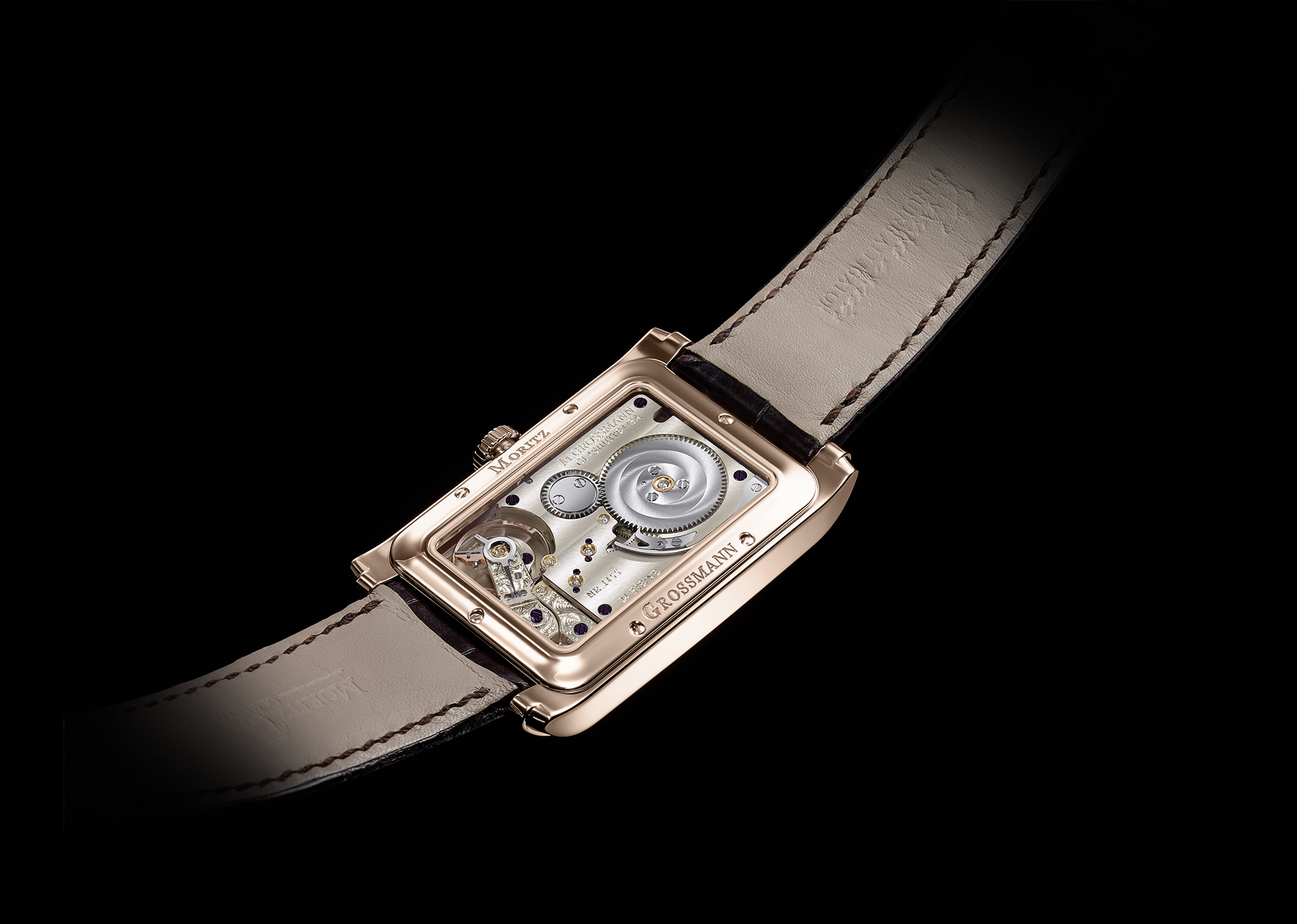 The ratchet wheel has a particularly elaborate surface finish in the form of three
band snailing. For the resulting optical effect, the teeth of the ratchet are initially
given a continuous bevel. The snailing is then traditionally applied with a bronze
bell. Turning the ratchet wheel creates an optical illusion: the rotation of the wheel
when winding the watch is no longer perceptible.

The stepped balance cock with hand-engraved pattern, the golden chatons and
the manually crafted hands tempered over an open flame perfect the extremely
sophisticated impression of this watch. 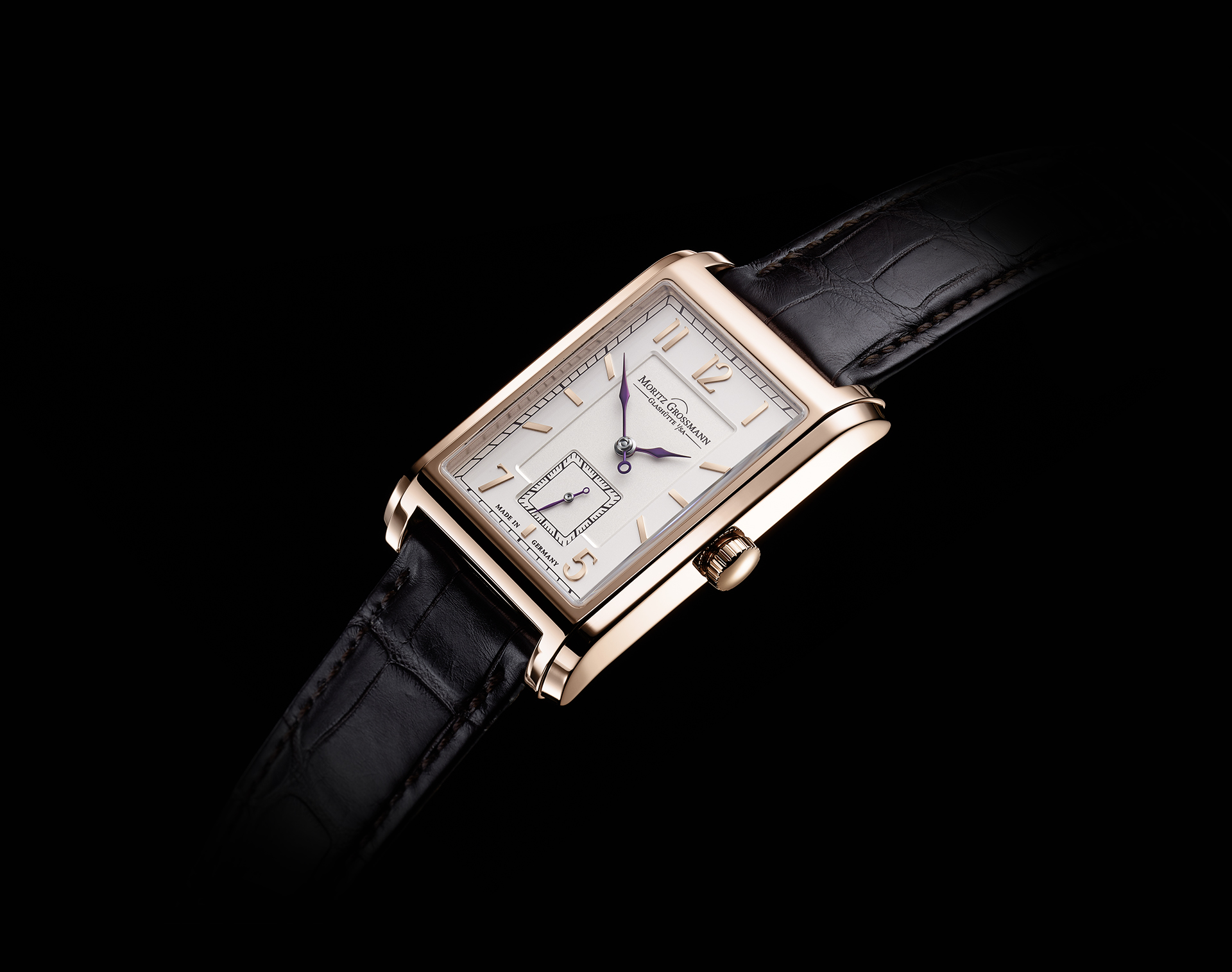 CORNER STONE “on the road”:
Grossmann Uhren GmbH presents its latest models and innovations as part of its
international roadshow 2019. Following the launch in Dubai on 30 January 2019,
Tokyo will be the second station with the launch of the CORNER STONE on
7 March. From May to July, new product launches follow in Hong Kong and
London.