One of my closest friends is the more than proud owner of a Rolex Submariner reference 5510 produced only in 1958/9. Exact production numbers of this reference are not known, but it is estimated that there are less than 500 pieces made, and nowadays probably less than a couple hundred have survived, although the survival rate of Rolex over a period of more than 50 years is very high. 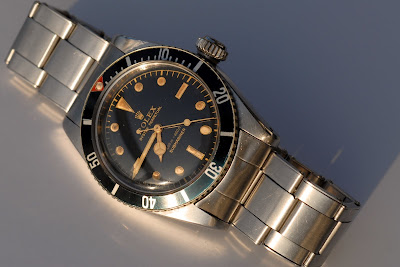 This watch may be considered one of the holy grails, due to its rarity, but even more so due to its beauty. It carries the 1530 caliber which is deemed much better quality than the 1030, it is more accurate. The 5510 resulted from the 6200. 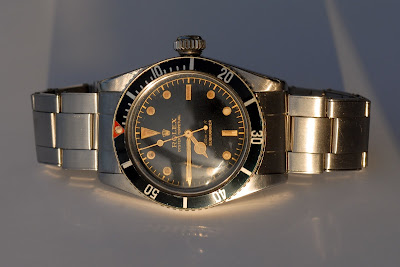 Due to its larger sized Brevet crown without crown guards this watch is called a “Big crown”.

The dial is such a stunner in the sun: 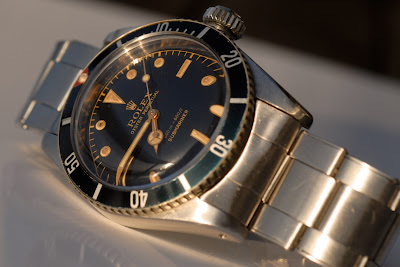 I only know one 5510 which I have ever seen live in my life. And that is this one.  Look at the case.  The condition of this watch is absolutely excellent, if the case was ever polished, then only very lightly. 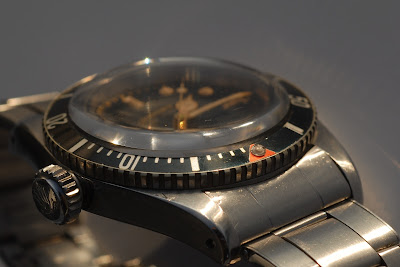 Take a look at the beautiful pictures. While the dial may have a partially tropic brown appearance, in fact the dial is rather dark, actually more like black. However, in the sun, this watch really has such a stunning patina and aura. Bear with me, these pictures are just the beginning, and there will be loads more to come. Hope you enjoy.

One Reply to “Rolex Submariner reference 5510 big crown – could that be the holy grail?”