Loading...
By Boris Pjanic
Want create site? Find Free WordPress Themes and plugins.
Last week I met with Florent Lecomte, french horology professor at the famous watchmaking school Faure in Morteau.  In addition, he recently introduced his second edition of a 12 piece limited edition watch which is extensively handmade.  The edition was sold out about 6 months ago, yet i tried to see him and convince to to make one piece for my client and great friend in the windy city.  Well, he wouldn’t make an additional piece but revealed to me that one watch remained unpaid.  So i convinced him into giving this watch to my friend with a week of waiting as he checked back with the non paying client.  Today, my friend received confirmation that he will get the unpaid piece.  It takes 2 month to make, but he will have to wait about 2 years.  What I know is that some 7000 miles away from me is very very happy today.  Congratulations.
And this is what I do.  I bring happiness to watchlovers.  And I am doing this with nearly 20 different independent watchbrands by now and it keeps growing.
1. His school watch: 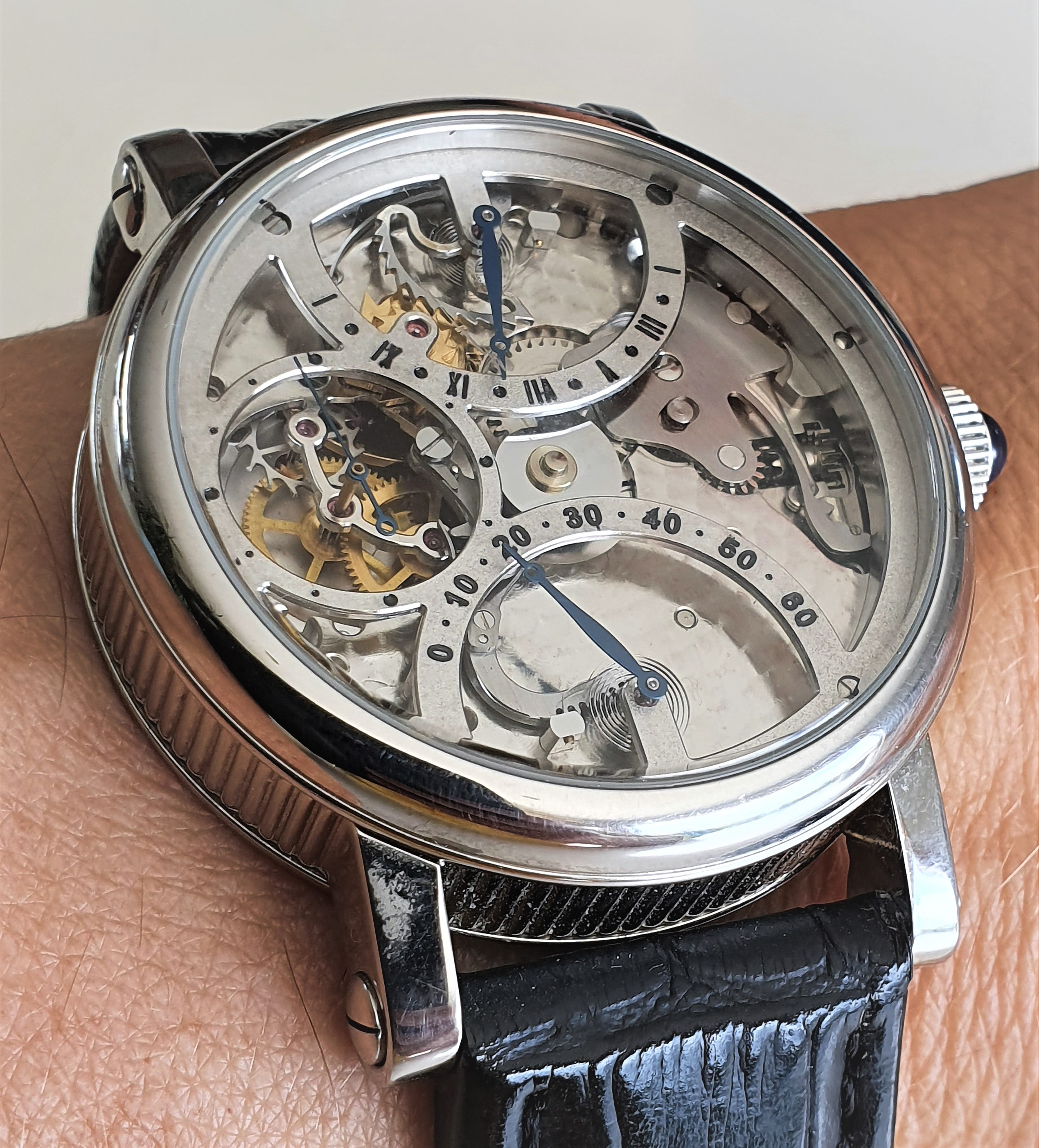 His school watch was “just” that, a first and only piece of his early watchmaking.  The movement is based on an ETA 6497 as far as I know.  I like the idea of a retrograde hours and minutes indication the way he made it.
2. His first limited series: 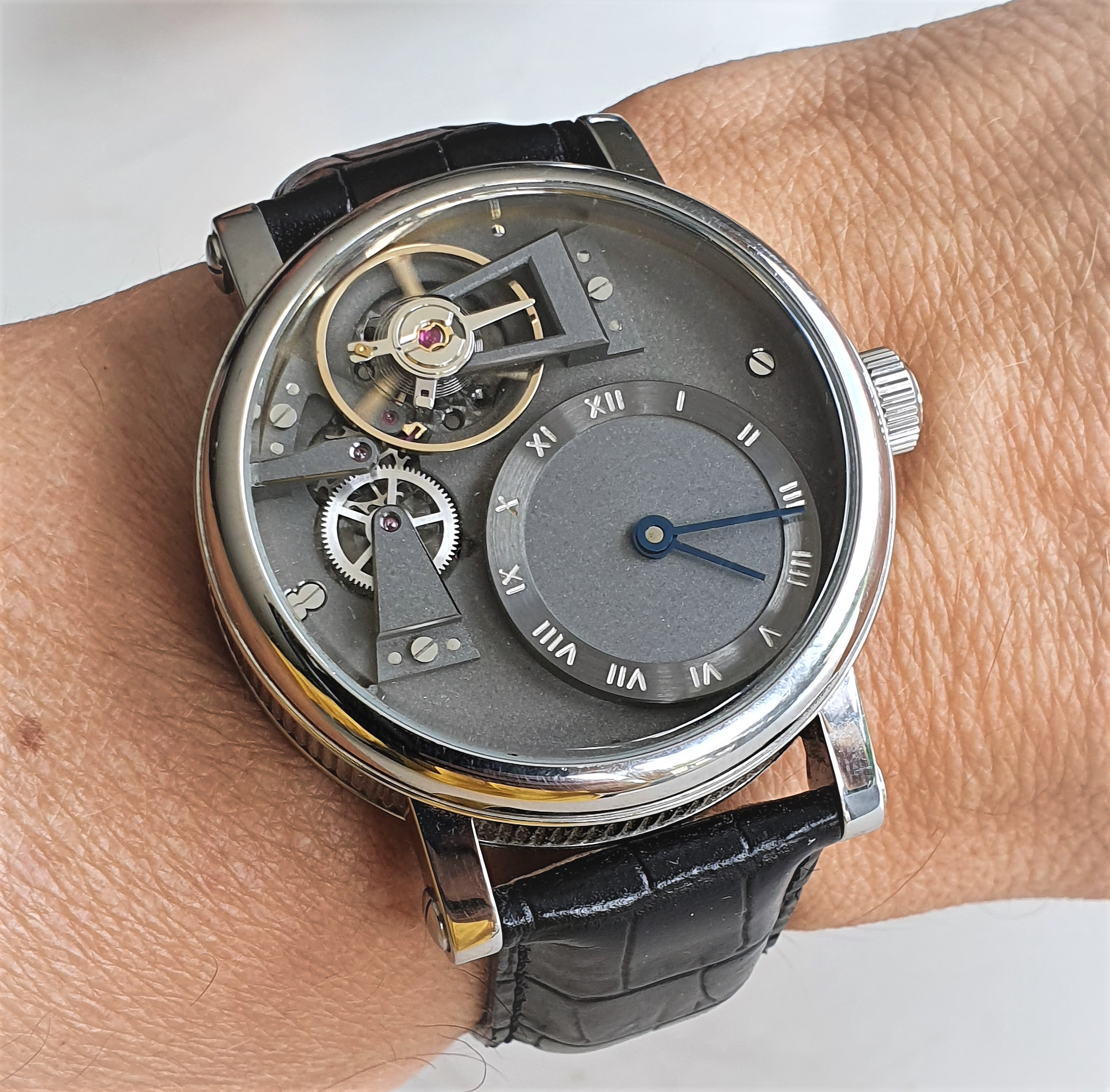 His first series was quickly sold out with 12 pieces only. The construction reminds strongly of the Breguet Tradition which is also Florent Lecomte’s favorite timepiece and clearly gives him inspiration.
3. His second limited series: 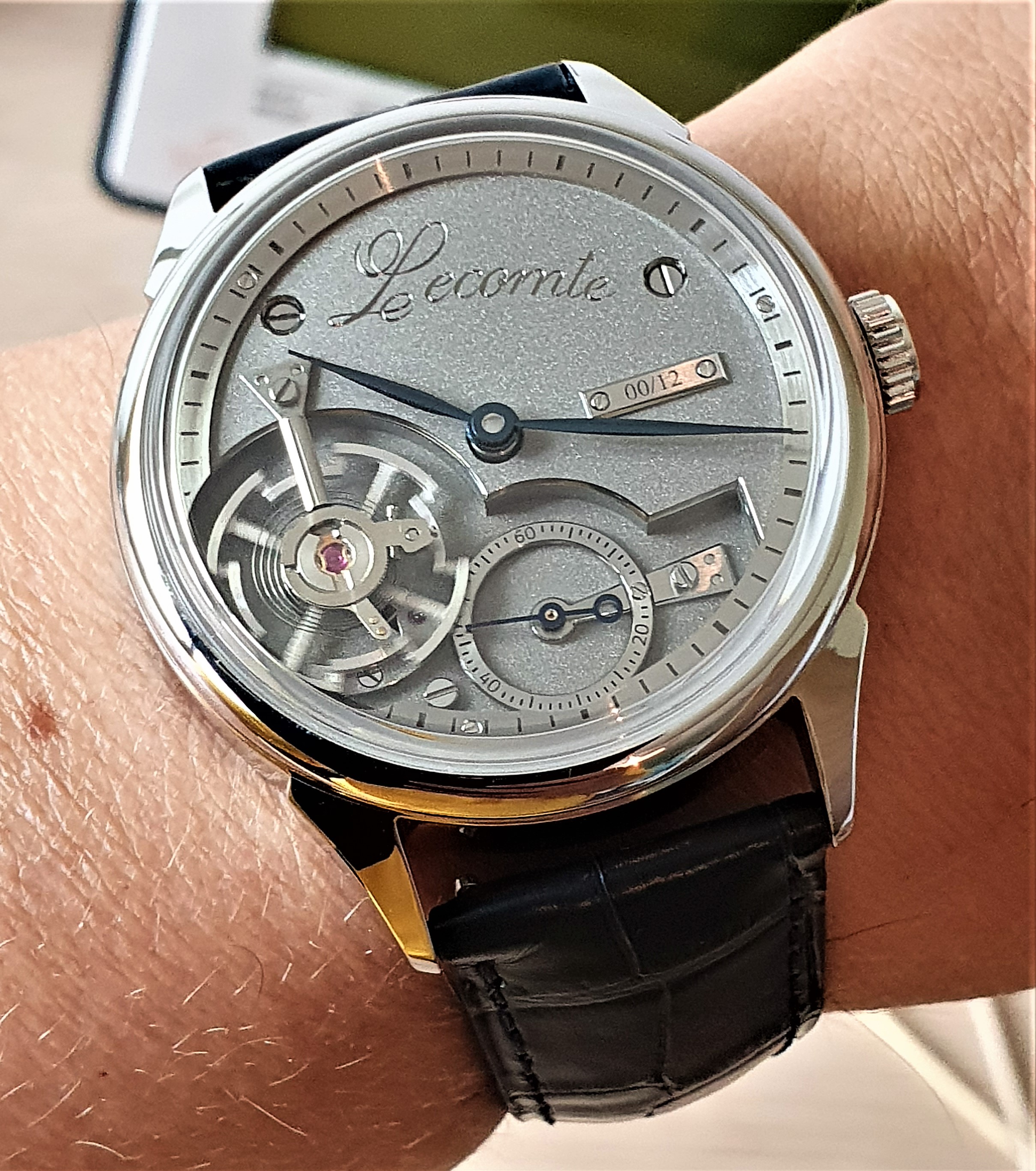 The second series sold out in a few hours early in 2021.  As luck wanted it, I met with him a few weeks ago for the first time and one piece had remained unpaid which I managed to organize for my client in the wake of our meeting.  Without the meeting, that would never have happened.  I am so happy for my client.
Again you see a setup reminding of the Tradition by Breguet.  His finishing is exceptional and it takes two months to create one watch.
And take a look at the back of his 2nd series: 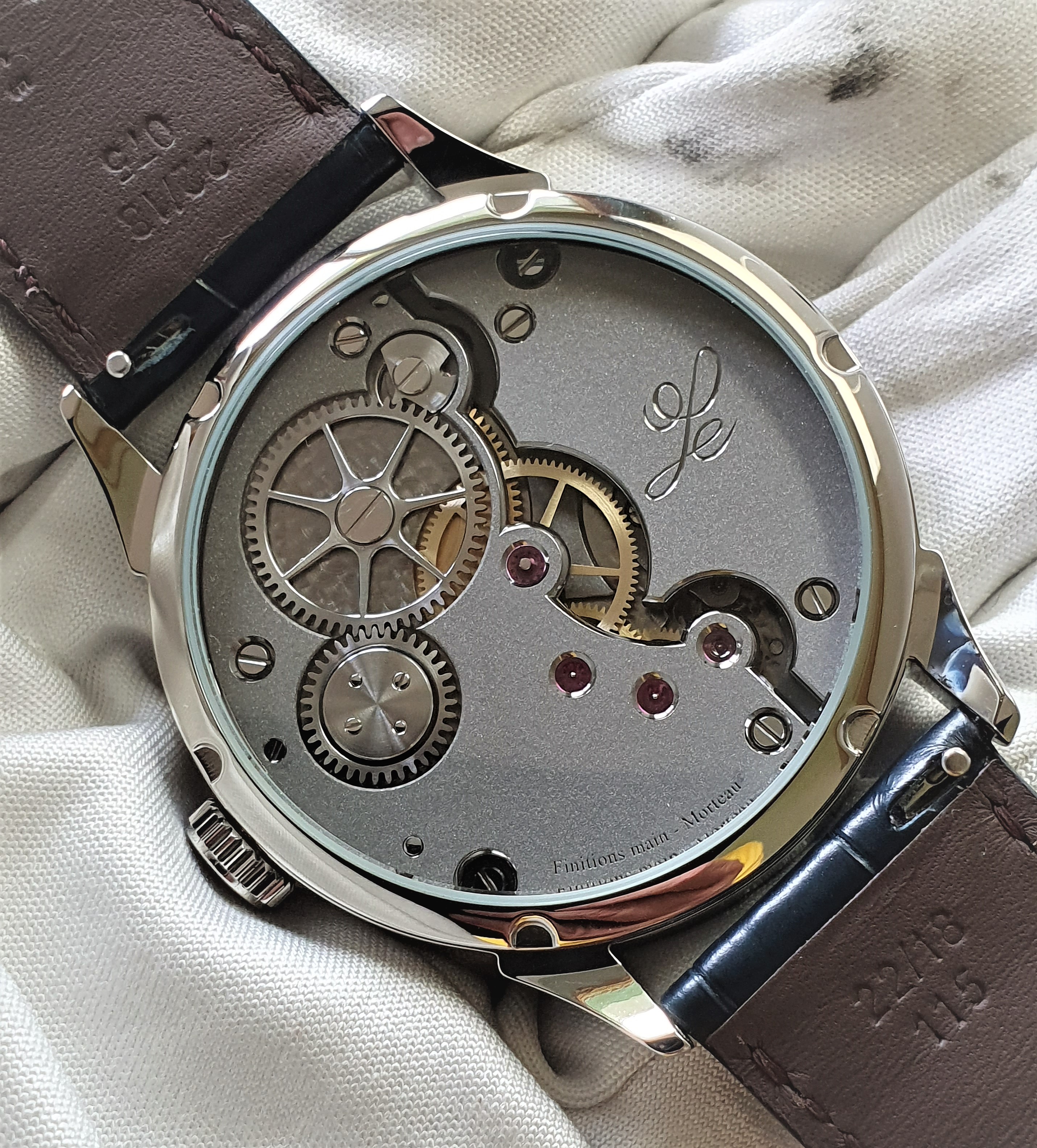 I am curious to see his next edition.  This is a watchmaker to keep my eyes on as he is exceptonally skilled, the finishing and design are simply amazing.
After I posted this contribution on Facebook, a collector in the United States write the below comment which I find more than impressive and therefore would like to share:
There is a spare elegance to this watch. The dial side balance wheel is set off heroically and off center without customary regard for symmetry. The outer track is interrupted but without any aesthetic consequence because the dial cascades down provocatively into the seconds subdial. Professor Lecomte has eschewed the natural propensity most would have followed to expose more of the gear train or the movement. By artful elimination of hour indices or numerals, we are left with a sense of overwhelming calm. The three small numerals on the seconds subdial at 20, 40 and 60 are almost the only concrete reminders that this is a device whose raison d’être is the deliberate process of measuring the passage of finite chronological time segments second by second with the cumulative accumulation of those time segments reflected in the movement of the hand set against the field of the outer track. There is something truly cerebral about all of this which makes this watch arresting in a way that is anything but modern. It is as if Lecomte is channeling the heritage of the French polymath Rene Descartes into his horology – there is a decided philosophical component to this piece which demonstrates deep thinking on Lecomte’s part about what is the true essence of a watch in terms of what is to be exposed and what is to be concealed. This is a scholar’s watch which represents a master craftsman’s journey of exploration. This reference will leave some cold but it will stir the hearts of others who share Lecomte’s fascination with elemental horology.
Did you find apk for android? You can find new Free Android Games and apps.
Spread the love