This is a really amazing timepiece.  Alone the idea behind it to show the time via a yellow fluid is exceptional.  This timepiece will be presented at Baselworld.

The team of HYT has accomplished something that was thought to be near impossible.  Ever since the water clocks (clepsydras) of the pharaos noone was able to create a timepiece especially for the wrist that can overcome the laws of gravity and show time with a fluid.  Behind this stand fluid mechanics, basically the ultimate in hybrid technology.

While the design may be considered more than rebellious, it is an outstanding innovation combined with perfection and wisely thought through creativity.  A stunning timepiece, nothing short of amazing in conception and implementation.

This takes fine watchmaking a step further, into a territory that was thought as unreachable.  Behind this stands Vincent Perriard who is the brainfather of this timepiece.

Vincent was so kind to send me detailed explanations of how this watch functions, and before I as a mechanically little gifted watchthusiast try to explain this in my own words, I will use the information he provided:

The principle
An encounter between Fine Watchmaking and fluid mechanics. One might say a utopia. Shattering all certainties, steamrollering conformity, the idea that led to the H1 was simple and consisted of two flexible reservoirs fixed to each end of a capillary. In one was an aqueous liquid filled with fluorescein, and in the other, a transparent viscous liquid. To keep them separate: the repulsive force of the molecules in each liquid, with a meniscus to mark the boundary between the two.
The two reservoirs at 06:00. While the first compresses, the second expands, and the other way round, resulting in the movement of the liquid in the capillary. As the hours go by, the fluorescent liquid advances. The meniscus, in the shape of a half moon, marks the breaking point with the other fluid in the tube, indicating the time. At 18:00, the fluorescent liquid comes back to its original position, going backwards. The secret that gets the reservoirs going? Two bellows made of a highly resistant, flexible electro-deposited alloy, each driven by a piston. And this is where watchmaking comes in to activate the system.

A mechanical movement to activate the hydro system

Orchestrated by Bruno Moutarlier, alongside Jean-François Mojon and his Chronode SA team, a mechanical movement is situated in the upper part of the watch, and propels a cam, which pushes the piston and activates the bellows.
The main challenge lay in finding an interface between the mechanical movement and the hydro system in a closed, waterproof circuit – a task further complicated by the limited space available to house them both. They had to be assembled separately to keep them independent, and then made to operate simultaneously. This is a highly delicate modular integration, which involves other constraints, such as the installation of the dial in two parts, through the sides.
I think it is time for pictures, so here you go: 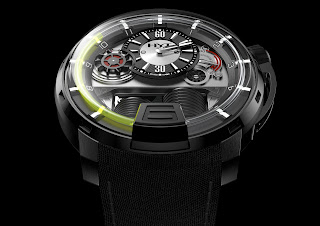 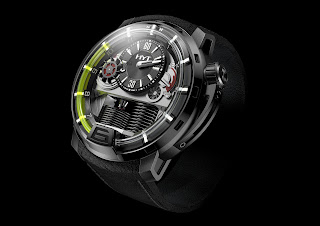 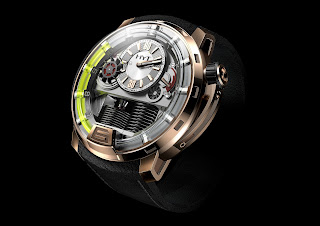 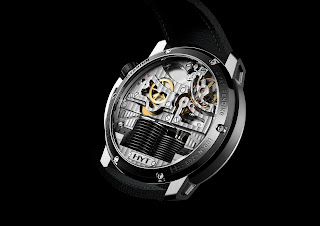 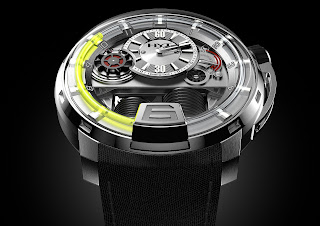