This morning I was browsing my archives to find a suitable watch to post on Watches & Art. While going through heaps of Rolex, AP, JLC and other images I came across a rather unusual watch I’d nearly forgot about: the Tutima Military Chronograph #798. So we’ll keep the fancy stuff for another day and stick to this German tool-watch for today. 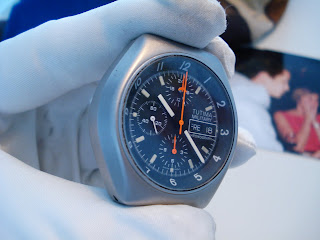 The Tutima Military Chronograph was introduced in 1985 and after being ‘subjected to the stringent criteria of the German Armed Forces’ central procurement department and critical examination by its pilot’s watch experts‘*, it became the official watch of the German Air Force. It’s still available today albeit only in a rather expensive titanium version, marketed as being ‘official standard equipment of NATO pilots‘*. I am unfortunatly hardly an expert on military pieces so this is it for todays history lesson… let’s focus on some of the features of this cult watch. 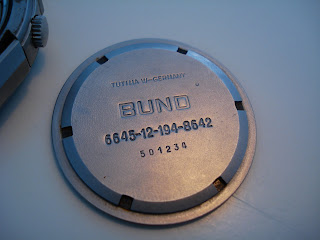 Like most officially issued military timepieces, this caseback of the Tutima shows a lot of codes. The BUND ofcourse stands for Bundeswehr. The W-Germany is a real throwback to an era gone by. 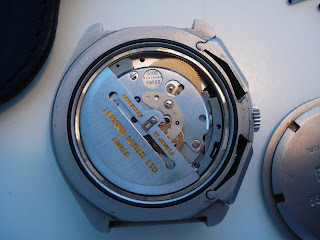 The movement powering the 798 is the Lemania 5100, a popular choice for tool- and military chronographs. Don’t be fooled by the cult status this movement gained over the years: it’s very ugly! The central minute counter is something we don’t see very often. Nowadays Tutima is one of the very few manufactures still offering this calibre. 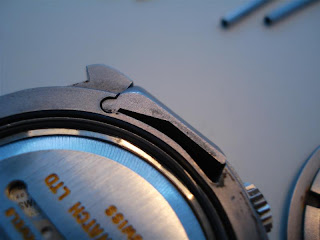 One of the most unusual features is the design of pushers. Tutima explains: ‘Tutima said goodbye to the usual buttons protruding from the case and instead developed large integrated pushers. This new solution to an old problem not only makes it easier for pilots to use the buttons when wearing gloves, but also offers another important advantage: as they do not stick out, the buttons can neither cause injuries in turbulent situations nor break off‘*.

This system is of very simple design but it functions surprisingly well. 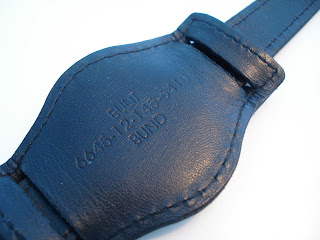 Like it’s predecessors like the Heuer 1550SG, the military versions were issued on a leather strap with the signature BUND-pad. The straps too are military coded. The originals are rather long. 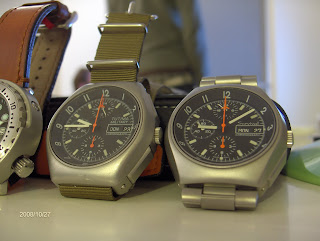 IMHO the Tutima 798 is an interesting watch for collectors looking for something else. Both the design and movement are very distinctive. It’s one of the last real mechanical toolwatches, designed for military purposes and truly used as such. 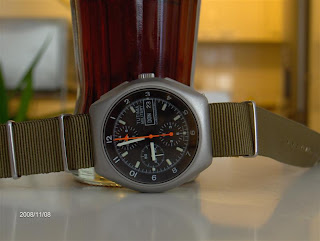